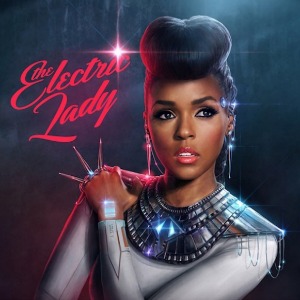 Featuring tighter songwriting, double the hits and zero filler, the follow-up to 2010’s The ArchAndroid sees Janelle Monáe take another step closer to becoming pop’s next polymath genius. An album of dazzling variety, endless conceptual invention and rich musicianship, its sheer imagination, scale and scope leaves the studio efforts of most other contemporary pop stars in its wake.

The second ‘e-motion picture’ in the so-called ‘Metropolis’ series, The Electric Lady is framed and then punctuated by panoramic orchestral interludes, film noir cues, and spaghetti western tropes. But rather than cinematic, the album more resembles a grand stage production, featuring a cast of thousands and with every inch of stage taken up with activity, movement, colour and detail; a historical epic spanning years of black music history, with the object being to locate its remarkable lead character’s illustrious position within the canon. Although imperfect, The Electric Lady is a huge statement.

Returning to The Archandroid’s sci-fi movie narrative, The Electric Lady is the next chapter (a prequel, in reality) in the story of Monáe’s android alter-ego, Cindy Mayweather, the titular ‘electric lady’ and, as before, a robot metaphor for the ‘other’ in American society: the African-American and the homosexual; a symbolism cynically commodified by the self-appointed Queen of the LGBT masses, Lady Gaga. A trend that Monáe revived, the idea has since found favour with Beyoncé, Nicki Minaj and even Frank Ocean, whose sci-fi show-tunes (‘Pyramids’) and Wonder-like Philly epics (‘Sweet Life’) have Monáe written all over them.

With its predecessor’s hip hop and contemporary r’n’b elements now dialled back, The Electric Lady’s palette is focussed, for the most part, on the earthen environs of pre-disco soul. For ‘We Were Rock And Roll’, think ‘Across 110th Street’, were Womack’s opus written by The Jackson 5 and embellished by Santana, while ‘Q.U.E.E.N’ – featuring brass, strings, Supremes-like backing singers and one Erykah Badu – is the type of paean to Earth Mother self-determination Badu would have made were she around in soul’s ’70s golden age. ‘It’s Code’, meanwhile, is a study in smooth organ-funk, and ‘Can’t Live Without Your Love’ is the type of yearning, erotic 70s r’n’b that would eventually be remodelled for the 90s by the likes of Toni Braxton. Each homage is perfectly realised, and for an artist whose conceptualism has been decried as having a distancing effect, Monáe has visceral passion and crackling emotional immediacy to burn.

As you’ve probably guessed by now, Monáe is a fanatical antiquarian. But while she brings the same modernising vitality to bygone styles as her chief influence Outkast, beyond the soul and funk there are certain genre relics here that should really remain that way. Namely, the rama lama pop of ‘Dance Apocalypse’ (redolent of the same aesthetically rancid pre-Berry schtick that made up Outkast’s horrible doo-wop effort ‘Roses’), the dodgy lounge soul of ‘Dorothy Dandridge Eyes’ and the easy-listening ballgown balladry of ‘Look Into My Eyes’.

Other genre experiments are decidedly more successful. With its quasi-hip hop beat and blend of sweetness and strength, ‘Victory’ vividly recalls the neo-soul of Lauryn Hill, while doused in ’70s grit and featuring none other than Prince, ‘Givin’ Em What You Love’ takes all of two minutes to trump every last plastic and practised attempt at a RAWK song released by Monáe’s peers in the last decade, from Aguilera to Rihanna. ‘Ghetto Woman’, meanwhile, is several genres in one – a patchwork of disco thrust, soul-rock and rap as seamlessly threaded as you’d expect from an artist as prodigiously pop-literate as Monáe.

Retroism is essential to her conceptual statement, with afrofuturism conceived as a balancing act between the old and the new; between futurism and what has been the conduit for the African-American experience as a whole – black music history. But for other reasons, retroism is especially essential on The Electric Lady. The album is set in the years before the robot uprising depicted on The ArchAndroid, at a time when the first rumblings of dissent and self-empowerment can be heard in popular culture. In turn, Monáe uses prequel period detail, focussing on black music from the late ’60s and ’70s where The Archandroid’s range was decidedly more present-day.

In the end, retroism’s conceptual dimensions aren’t enough to detract from the old-fashioned feel of Monáe’s music – especially considering that it’s increasingly a requisite for pop stars to keep abreast of new producers, sometimes packing one album with a dozen or more different knob twiddlers. It’s also telling that the most saleable tracks here – ballads ‘Primetime’ and ‘What An Experience’, among others – are those in which Monáe deviates from the album’s unifying conceptual premise and its attendant narrative. It’s further indication that Monáe’s conceptual ambitions may be to blame for her relatively poor album sales, in that she seems unable to convey her convoluted thematic ideas at the same time as making universalist pop in the post-‘Umbrella’ era, and vice versa. As such, the slow jamming ‘Primetime’ (featuring Miguel) is pure formula; nondescript, user-friendly pop that drops the sci-fi rhetoric for chart-ballad lyrics. The same applies to ‘What An Experience’, where Monáe spouts romantic white noise on the subject of her lover’s lovely eyes over a mix of pop-ska and new romantic synth-pop that is tonally and thematically at odds with the rest of the album.