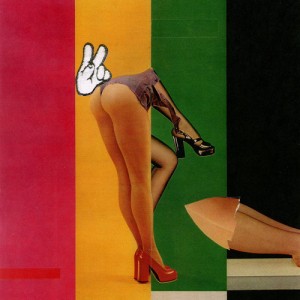 Eric Copeland might well be one half of, er, ‘testing’ experimental act Black Dice, but it’s important to remember that the New Yorker also runs in the same circles as fellow Brooklynites Animal Collective, in many ways mastheads of a wholly different New York mindset at right angles to the Dice’s subterranean and art-damaged electronic no wave. Black Dice could be said to have pioneered the Williamsburg scene which AC would later rule, and genealogically AC’s brand of mutilated and techno-infused freak-folk owes a great deal to Black Dice’s noise, which like AC’s music tends to offer an oddly organic-feeling (or indeed, bucolic) take on power electronics. On the evidence of Copeland’s solo outings, however, the idea trading goes both ways.

Black Dice are often more intriguing than entertaining, which you feel is something that Copeland feels both liberated and relaxed enough about to put right on his solo work. The result is music every bit as unclassifiable and singular as that on an Black Dice album, but which is characterised by the same playfulness that drives AC. Consequently, in true AC style, Joke In The Hole is proof that ‘experimental’ and ‘accessible’ needn’t be mutually exclusive terms, with the upshot being a coherency – both sonic and aesthetic – that’s often lacking in Black Dice, and hugely beneficial here. In short, while a tad samey and a mite too slapdash (read gonzo/slacker: there’s no Dilla-esque science on offer here) for hardline electronica fans, and somewhat sonically overstuffed, the sample’n’beat collages on display here are listenable as all hell.

The source of Joke in the Hole’s accessibility is rhythm. Rhythm here plays a similar role to the bass guitar in PiL’s Metal Box – think the interplay between Jah Wobble’s dub notes and Keith Levene’s free-form atonality. It’s a relationship that’s echoed in a thematic/aesthetic respect – for example, if the master rhythm is, as on ‘Tinker Bell’, a summery ’90s hip hop beat, then after establishing that theme Copeland is then free to play on the motif with absurdist postmodern juxtapositions (both beat and sample-based, and sometimes both at once – sample flips are a common feature). The end product is a kind of blocky virtual tropicala, inhabiting a space that’s hallucinatory insofar as it offers a heightened version of reality – and not dissimilar to the cyber-dub of Peaking Lights, or the AOL-era exotica of Gatecrasher. It’s an example of how a playful spirit can lead to interesting art, though by the same measure, Joke In The Hole walks a tricky tightrope between cut’n’piece electronica in the Steinski vein and the more serious art gallery fare that Black Dice tend to lean towards – the ‘auditory instalments’ of musique concrete.

With the levels way in the red and the aura of a 1000 musical moments swarming, there’s no end and no beginning to Copeland’s insectoid blur, with absolutely zero meaning to be derived from his choices of what style to combine. It just is: mindless, unfathomable – a little like the digital fracas of our online lives.