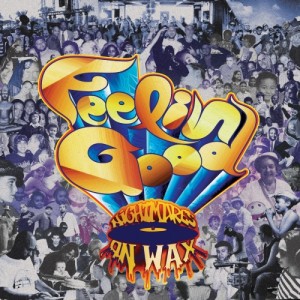 From way back in the ‘88 bleep techno days when it was a duo, to the thick hip hop of his last offering Thought So..., George Evelyn’s music as Nightmares On Wax has always had a brightness to it. But in Feelin Good, his latest album for Warp, this has become something of a dichotomy.

Evelyn has lived in Ibiza for the last seven years, running a successful night at the island’s oldest club and releasing records when he wishes. Considering the idyllic life this probably is, In A Space Outta Sound and Thought So… – both written while residing there – had a surprising fire at the heart of them that marked a return to form after the sprawling, overly conscious aggravation of Mind Elevation.

Feelin Good doesn’t have this same energy, but isn’t necessarily a bad result for what it does instead. It is pop-leaning, partly from its mixture of live band and samples, but probably more from its inclusion of a roster that includes folk singer Katy Gray, Jazzanova’s arranger, and ex-members of Zero 7, Mica Paris and M People. I would also say this explains a lot about the downsides of the album too; Feelin Good often sounds like a group of musicians living a winsome Balearic lifestyle without much passion beyond feeling good, which can be divisive.

This arises most explicitly in ‘Om Sweet H(Om)e’, which disappointingly closes the album in the ex-raver’s chill out tent, a simplistic hip-hop beat added to what is essentially a New Age track. But it also leaves many potentially great tracks feeling incomplete: Edwin Birdsong-ish ‘Now Is The Time’, with its potential as an ’80s NYC house dub; ‘Eye (Can’t See)’, a Trainer-era Plaid-like track; the early Primal Scream groove of ‘Tapestry’ – each feels too compacted into bright, easily digestive form, only ever half of what they set out to represent.

However, credit must be given to Evelyn for taking particular care over his arrangements and song writing. The drum machine toms in ‘Luna 2’ are a valuable surprise around on point instrumental phrasing and punctuation from all involved. Drum roll fills, percussion embellishments and flute bursts in ‘Give Thx’, a bright Cee Lo Green-like track with earnest horn section progression, makes for a lovingly crafted number. ‘There 4 U’ is a high point too, with its sweet combination of jazz guitar chops, clever keyboard strings and glockenspiel, amp buzz and incredibly quiet, spinning hi-hat just audible below.

Feelin Good still captures a lot of realism and simple pleasure, and has catchy elements. It may well appeal to those content with downtime after more forthright records. As an album, however, Evelyn’s good mood sits somewhere between decisive and whimsical.