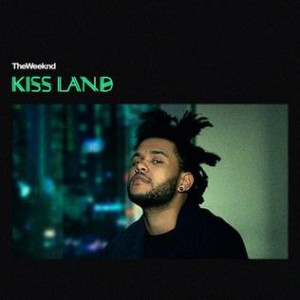 Unpredictable and inventive, hyperactive and marked by an unending procession of textural digressions, percussive whim and electronic experiments, Kiss Land offers a veritable production bonanza. A bold and extremely necessary departure from the musically prosaic torch songs prevalent in the latter stages of Trilogy, Abel Tesfaye’s major label debut proper is a sprawling cornucopia of tricks – a blitzkrieg fantasia as devised by a musician more interested in sounds than music, and a crop of tunes launched from the restless mind of a burgeoning auteur hooked on the thrill of discovery.

Kiss Land sounds downright gorgeous: a pristinely mastered headphone listener’s dream with a marbled quality, but sensual like lush suede – a production sheen at once otherworldly and urbane in its stylish futurism. Tesfaye cited the work of film-makers David Cronenburg, John Carpenter and Ridley Scott as an influence here, and what is truly remarkable about Kiss Land is how uncannily its production team have envisioned what the directors’ darkly beautiful cinematography might sound like in sonic form. Pump up the volume and you can hear in the record’s chalky neo-Tokyo hues the techno-sleek blue environs of Scott’s Black Rain, the ink and pastel twilights of Carpenter’s Star Man, and the sexualised neon unreality of Cronenburg’s Videodrome.

Bonus track ‘Odd Look’ even apes Vangelis’ ‘End Titles Theme’ from Scott’s Blade Runner, with Drive‘s don of hyper-’80s opulence, Kavinsky, as its producer. The Blade Runner-referencing ‘Tears In The Rain’, meanwhile, is themed on author Philip K. Dick’s reoccurring preoccupation with dissociation – though of course, in Tesfaye’s case, detached numbness is the product of fame and meaningless sex. R’n’b is a genre that fetishises both the night and the very sartorial immaculateness of technology, and Kiss Land offers both in excelsius.

Seductive but melancholic, the directors’ shared style is a logical match for Tesfaye’s sound: a corresponding blend of lust and sadness. However, the Canadian claims that he specifically chose these directors as his inspiration because of their ability to “capture fear”, which is odd considering that Kiss Land is, as Tesfaye also claimed, a post-success album about life as a touring superstar. But that’s Tesfaye for you: inexplicably fucked up and increasingly so the higher his star ascends.

Beyond that, several tracks carry the influence of cinematic urban music’s inarguable dons. The spectre of Portishead hangs heavy over Kiss Land, and not merely in terms of Tesfaye’s now controversial ‘Machine Gun’ steal, with the Bristolians’ aesthetic particularly in evidence on ‘Professional’, as cold war paranoia merges with sirenic nods to espionage noir.

As was the case with Trilogy, the average Kiss Land song – and particularly its five-or-so sky-scraping ballads – rarely dip below operatic levels of melodrama. How else, after all, would a self-obsessed egomaniac such as Tesfaye choose to present his trivial worries but in the form of a Shakespearean tragedy? But whereas on Trilogy grandiosity meant monotonously structureless, perma-epic splurges (see most of Echoes Of Silence), here the motorcade of production features serve to sculpt the ballads, making for snappier compositions replete with narrative nuance, proper dynamics and much needed tonal shifts, while at the same time providing extra emotional layers beyond Tesfaye’s stock melancholy. As ‘Professional’ leaps from string-laden mysticism to rave synths, to the Emika sample that paves the way for the track’s finish, in turn an intimate tenderness gives way to euphoria, followed by a sinister strain of eroticism and finally a kind of joyful mania.

Although ‘The Town”s lofty synth intro points towards an all-out splurge, matters quickly take a turn for the incisive with the arrival of a unnervingly jagged drum interlude, followed by the track’s uneasy, jarringly raw mid-section: a brittle lattice of stinging electric piano and cacophonous vocal glitches. ‘Pretty’, however, is Kiss Land’s all-out production banquet: a proverbial hyper-ballad featuring everything from Burial-esque girl samples to Cronenburg-ian synths and clattering PiL-esque percussion breaks. However, a conventional ballad it remains – even if the unnaturally lucid production cues convey Tesfaye’s unreciprocated affections in completely unconventional terms. Dejection never sounded so over-simulated.

Aside from the rock-infused bluster of ‘Love In The Sky’, Kiss Land‘s production affords the Trilogy formula real bite. It’s a newfound hard edge borne out of the slow ebbing away of romance, as Tesfaye transitions from the womblike safety of adolescence to the reality of adulthood – with the comforting chillwave climes of Trilogy giving way to Kiss Land’s cold, modernist angles.

It’s on the more intense and uptempo tracks that the kinetic production style truly makes sense though. Tesfaye’s sound remains a uniquely druggy strain of r’n’b, and on that front, the psychedelic codeine droop of Trilogy is replaced by the synapse-blazing scream of prescription amphetamines. Taking Italo-disco gem ‘Precious Little Diamond’ and supercharging it with adrenalised pacing, punchy percussion, heavy kicks and the bursts of helium hyper-soul that are Tesfaye’s melismas, ‘Wanderlust’ elevates the nervous vainglory of Fox The Fox’s already coked-out original to new levels of wired, sweat-dripping urgency (evidently still on RAM-time, Pharrell’s retro-ist remix of the track in the album’s bonus section illustrates just how modern Kiss Land actually sounds). Then there’s the title track. Though marking Tesfaye’s return to the horror movie-inspired fare of ‘Life Of The Party’ and the truly ghoulish ‘Initiation’, the caricatural, postmodern manner in which the track’s Carpenter-esque synths and Transylvanian chords come together on ‘Kiss Land’ more so evokes a kind of heightened reality. It’s as if Tesfaye’s pill-popping, nocturnal calling as an impossibly powerful sexual predator is, in Abel’s headspace, blurring the lines between Tesfaye the person and Tesfaye the star of his very own movie: the glamourously doomed villain of the piece whose nihilism drives women crazy. With this in mind, the blood-curdling screams of some expiring cheerleader that punctuate the track are as disquieting as they are telling.

Ultimately the genius of Kiss Land‘s production lies in its ability to literalise Tesfaye’s fractured state of mind. Like one long strobing slide show of sickly pleasures, throbbing skylines, shame-drenched traumas and chemical highs, the album’s aural phantasmagoria serves as a kind of psychodramatic extension of Tesfaye’s fraught interior life, much in the same way My Dark Twisted Fantasy and Yeezus literalize Kayne’s journey from corrosive self-deification to tortured insanity. Tesfaye’s attitude towards the opposite sex makes Robin Thicke look like Daniel O’ Donnell, and Steve Albini a known advocate of a woman’s right to cheat on you with your best mate. Just watch as he oscillates, queasily, psychotically, between little boy servility and messianic imperiousness, or, most frequently, between self-pitying vulnerability and attempts to assert his dominance with the aid of sexual hostility. Observe how on ‘Love In The Sky’ he talks about “domesticating her” or brags with bored self-assurance that shortly he’ll be making her cum “two or three times in a row” in that condescending mew of his (“I’ll teach you how to dream”, he tells the lucky mortal – praise the lord for celebrities!), at the same time as imploring his quarry to reassure him of his artistic genius.

This same scenario is replayed right throughout the album: Tesfaye seeking solace in the arms of strangers, provided he remains the master to his groupie saviour. It’s enough to keep Jezebel in copy until Easter 2550, and, all things considered, never before has such terrific ugliness been married to such alluring music. But hey, evil things are like that, aren’t they? Never the peach without the poison.