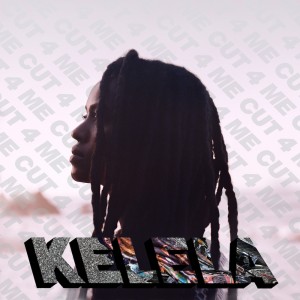 Available on: Fade to Mind

One of the threads that defines the Fade to Mind label/collective is the promise of boundaryless club music for a generation that has never really gotten over the death of Aaliyah. Beneath every masterful bootleg by the likes of Kingdom, Nguzunguzu, and Total Freedom is a hypothetical: what if there was a singer who could bring new life to these “sad, sexy, scary” compositions?

With her eagerly-anticipated debut Cut 4 Me, Kelela delivers on that promise. The album (whose “mixtape” designation is wholly inadequate) teams the young talent with an accomplished list of collaborators from the ranks of Fade to Mind and Night Slugs, each pairing somehow more striking than its already impressive parts. Which is not to overstate the contributions of the producers: this is Kelela’s album — her words, her voice, her songs — and it is problematic to describe her as a muse for her own work. Still, it is remarkable how artists with such personal, distinct sounds have sublimated their styles in service of the singer (e.g. how Morri$ offers trap extravagance on the ‘Go All Night’ interludes and Kelela turns them into weed-fueled bedroom entreaties).

Kelela’s singing is reminiscent of Groove Theory’s Amel Larrieux and Little Dragon’s Yukimi Nagano, vocalists she has named as influences, and throughout Cut 4 Me, the range and character of her voice is always affecting and never showy. As she darts around her register on lead single ‘Bank Head’ (which appears here in an extended version, giving new life to a song that has percolated for over a year), she sings that she “need[s] to let it out” — a statement of purpose that describes the album’s cathartic underpinning. The heartache, loss, and self-discovery of broken relationships dominates the album: “I gave my all to you, but it seems my love was not enough now,” she sings on ‘Something Else’. “I know you’re hurting too, but I lost a place I barely found.” As is often the case, an artist’s pain is the listener’s gain.

Cut 4 Me opens with ‘Guns & Synths’, a song whose title alludes to the collision of lush instrumentation and violent percussion that marks the album. Sonically, much of the album flows from the melodic soundscapes of Jam City’s Classical Curves and Girl Unit’s Club Rez; the two producers contribute three songs among them, including ‘Keep It Cool’, which is built upon Jam City’s pneumatic ‘Scene Girl’. Throughout, the team of producers offer some of their most melodic work to date, with compositions that reveal themselves as songs, not tracks, and leave plenty of white space for Kelela’s voice (e.g. the chorus of ‘Floor Show’, the piano chord breakdown of ‘Cherry Coffee’). The juxtaposition of guns and synths is on full display on the Kingdom-produced title track, which simultaneously glistens and pummels as Kelela alternatively pleads for and insists on displays of mutual devotion.

Elsewhere, the metallic beatcraft of Nguzunguzu underscores Kelela at her most fierce and seductive. Highlight ‘Enemy’ is all shattered glass, horror score strings, and grime syncopation, and finds Kelela taking an R&B staple — the kiss-off anthem — and illuminating new depths of fear (“Now you’re up in my face / Breathing down my neck”) and anger (howling “I need someone who knows / Someone who gives a fuck / But you don’t know how”). Similarly, the aquatic ‘Do It Again’ (produced by NA, aka Nguzu half Daniel Pineda) tells a psychosexual tale (“late at night you feel me creeping / one touch takes you out your sleep… now you’re wide awake I’m on top / suddenly I’m the one who can’t stop”, etc) that uses Kelela’s chants as percussive loops. The song also demonstrates how the vessel and the execution of a song can alter its experience: imagine if Chris Brown or The Weeknd were singing this.

“I would like to do Brandy but weirder,” Kelela said in her interview with FACT earlier this year. “Something that would resonate with most people, but make them feel a little uncomfortable.” With this goal in mind, Kelela succeeds. Cut 4 Me is reverent of R&B tradition without leaning on nostalgia or pastiche, and its sonic trailblazing and darker tendencies (especially lyrically) will certainly make some listeners “uncomfortable” — as it should. From the evocative title on down, there is nothing about Cut 4 Me that doesn’t challenge the listener’s expectations of what R&B can be in 2013 and beyond.