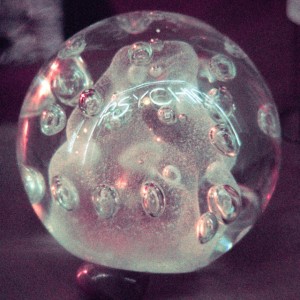 Available on: Other People / Matador LP

There aren’t many artists who will remix an entire Daft Punk album or release a prog-techno record in 2013, but Nicolas Jaar has always seemed to do his own thing. Psychic, the debut LP from his band with Dave Harrington, expands on the sprawling space-progtronica they explored on their self-titled 2011 EP. On paper at least, Darkside sounds risibly precious: after all, Jaar is the guy who was so piqued by the idea of people listening to his music digitally that he pioneered the “Prism” aluminium cube format. But he and Harrington bring consummate skill to the project, and Psychic is brimming with ideas, instruments, sounds and influences that, against all logic, actually work.

The opening track ‘Golden Arrow’ is a behemoth that packs kosmische, drone and disco into its 11 minute runtime, and you’re in for a good four minutes of space-rock synths and faraway strings before the main beat enters. It’s worth it, though: a warm, lolling pulse accompanied by bluesy guitar figures that give bulk and depth to all those nebulous sounds. ‘The Only Shrine I’ve Ever Seen’, which opens the record’s second, more dance-oriented half, has the kind of glorious minimal techno throb you could listen to for several hours without getting bored. The array of percussion is particularly lovely here, as are the wistful crackling textures that also coated most of Space Is Only Noise, and the warped and layered vocals. ‘Freak, Go Home’ is also stuffed with sounds: a choir, acoustic and electronic drum patterns that spring up as if from nowhere, winding guitar lines, layered vocals, and psychedelic synths. Dense is an understatement; it’s like an explosion in a factory of sound and colour.

Psychic isn’t without its faults. Everything is reverberated into infinity. There’s an epic guitar solo and falsetto singing on ‘Heart’, the album’s lowest point – in fact, there’s a lot of falsetto singing on the whole record. The prog dirge ‘Metatron’ is as pompous as you’d expect a song called ‘Metatron’ to be, and the solemn crashing chords and vocal duet on ‘Greek Light’ are a bit ridiculous. But the more restrained songs on Psychic balance these ones well. On ‘Paper Trails’, Jaar’s voice – dry and deep and louder than usual – is a perfect foil to the blues guitar licks and bright handclaps. Though ‘Sitra’ is an interlude, it’s one of the album’s highlights, panned almost entirely to the right and consisting of electronic crackle, piano, and not a whole lot else.

Two things save Psychic from overblown self-indulgence: the mixing, which is impeccable, and a well-edited length of 45 minutes. How you feel about music equally influenced by Ricardo Villalobos and Pink Floyd is entirely a matter of personal taste, but you could never accuse Darkside of unimaginative pastiche. For a record that wears its retro influences so openly, Psychic is surprisingly forward-thinking.