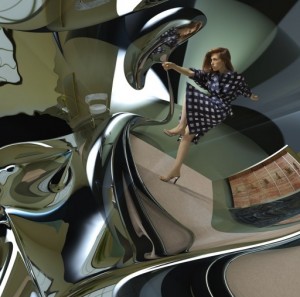 Coverage of Cameron Mesirow’s debut LP as Glasser amounted to something of a crash course in how not to write about female musicians. “There really are some weird women out there right now,” said the BBC’s Greg Cochrane in his review of Ring, seeming to take “weird” to mean “not in the charts”, or perhaps “artistically autonomous”, before throwing in a Kate Bush comparison for good measure. Pitchfork’s Joe Colly, meanwhile, littered his review with sounds-likes, some merited – Bat For Lashes, whose sense of high drama Mesirow shares in places; Joni Mitchell, who she cites as an influence – others seemingly linked only by their number of X chromosomes (Zola Jesus anyone?).

There’s no excusing it, this gendered grasping for influence-touchstones. But it can perhaps be explained, partially, by the qualities of the record itself. There was something naggingly ephemeral about these songs, packed as they were with sonic bric-a-brac but light on melodic and harmonic content, often happy to meander around a single loose motif while Mesirow’s lyrics intimated and alluded without ever quite stating anything much. Of course, when a male artist withholds or obscures he invariably benefits from the mystique; a female artist, on the other hand, simply becomes fodder for whatever perceived lady-pop gestalt happens to be forming in music journalists’ imaginations. But, fair or not, Mesirow appears to have learned her lesson this time around. “With Ring, there wasn’t enough information to explain Glasser aside from the music,” she said in a recent Pitchfork interview. “This time, I hope who I am will make more sense, rather than it being anyone’s guess, which can be dangerous.”

This acknowledgment of pop-as-gesamtkunstwerk – an understanding that any and all variables, whether musical, visual or conceptual, must be considered and controlled to the utmost degree – permeates Ring’s successor, Interiors. Following her move from California to New York, lyrically the record charts Mesirow’s struggle with agoraphobia, mapping her own troubled psyche onto the vertiginous contours of the city. Portraits accompanying the release, created in collaboration with Jonathan Turner of performance art group Yemenwed, appear to show Mesirow entangled in a queasy landscape of undulating chrome surfaces; an image that suggests both the modern city’s dynamism and its confusion. As Mesirow puts it succinctly in ‘Exposure’, “This building puts a new angle through the sky / The city moans / In its reflection we can feel what lies ahead“.

Fittingly, then, Interiors sheds the slightly hippyish vibe of Ring in favour of a slick but troubled cosmopolitanism. The arrangements are sleek, panoramic, bustling with synthetic life. The only obvious ancestor is early noughties Bjork (opener ‘Shape’, it should be said, sounds so much like a Vespertine offcut it’ll make your head spin). Otherwise Mesirow convincingly builds a sonic metropolis of her own, and at points touches brilliance: as in ‘Dissect’, swooning at the opening, digi-panpipe techno at the close, or the jubilant ‘New Year’.

More often than not, however, where Interiors falls down is in its musical ingredients. Songs proceed according to an odd, cluttered logic, veering off into unexpected spaces, or in the case of ‘Keam Theme’ and ‘Forge’, sputtering to a halt altogether partway through. Moments of sonic gorgeousness – the unexpected chorale-like vocals at the end of ‘Window iii’, say, or the liquid strings that close final track ‘Divide’ – are often all too fleeting.  All this would be fine if the seeds of Mesirow’s songs were more robust. But, as with Ring before it, it often feels like Interiors’ ideas could be bolder, its hooks hookier. As a pop-object, Interiors is far more convincing than its predecessor; as a musical experience it is still, regrettably, thin.