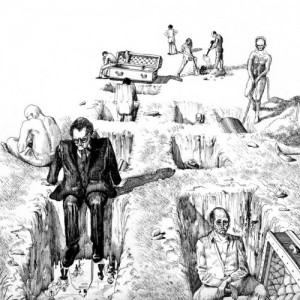 Only after she makes music, Laurel Halo explains in a recent interview with The Wire, do questions of identity come up, and on her second album her love for “feeling like a nonentity when I’m jamming or writing” rings especially true. Where on her debut LP Quarantine Halo voiced fear and claustrophobia with lyrics like you’re “you’re mad because I will not leave you alone” spoken by largely untreated vocals at the front of the mix, Chance of Rain is more impersonal, and as such its headspace is calmer and more reflective.

Its instrumental tracks evolved from Halo’s live hardware performances. Though they evince a clear debt to Detroit techno and house, they’re winding too, at once spacious and heavy with unpredictable synth passages and off-kilter percussion. ‘Serendip’’s drums tighten and unfurl as a thick fug of synths grows more pressing, the swathe of electronic ambience countering the jittery, urgent percussion. The mingled paranoia and melancholy of Quarantine are still present, but here they’re further from the surface, less airless and desperate, and occasionally offset by glimmers of hope.

Chance of Rain’s weaving structures and airy textures do surprisingly little to mitigate its intent focus. The kick drums on the ecstatic ‘Ainnome’ beat a meditative tattoo, and a bassline dips in and out with an earworming quality that makes it seem to linger for longer than it really does. On ‘Onerai’ Halo pairs heavyweight drums with an insistent bassline and gaseous synths that fizz and cough. New elements swoop in at every turn – an abrasive pad and a distorted sample; an acid squelch or chattering woodblock. It’s fragmented, but sounds both spontaneously conceived and painstakingly crafted. The magnetic drum patterns on ‘Chance of Rain’ and gurgle of synths on ‘Thrax’ are also both painterly and restrained, the songs’ freeform structures compelling but still a far cry from the rigid frameworks of techno proper.

Shorter piano-led tracks ‘Dr Echt’, ‘-Out’ and ‘Melt’ do much more than frame the album and bridge the percussive songs. They’re central to Chance of Rain’s balancing act between immersive, rhythmic body music and moments coloured almost entirely by atmosphere and mood. Of course, the combination of piano and techno is hardly a new one, but Halo’s sparse minor-key passages are singularly affecting even as they describe no single emotion, instead playing on the tension between familiarity and disquiet.

Halo stirs unease by gutting her songs of individual agency, plotting intricate, desolated landscapes. There’s a Heisenberg principle-like quality to her music, not just between points in her discography but also within the album itself. The more you try to fit Chance of Rain into one category, be it techno, house, ambient, experimental or synth – and its songs contain elements of all of these and more – the more it slips through your fingers. As its title implies, Chance of Rain hinges on uncertainty and fluctuating pressure, not outpouring. It’s impersonal, then, but never inhuman.