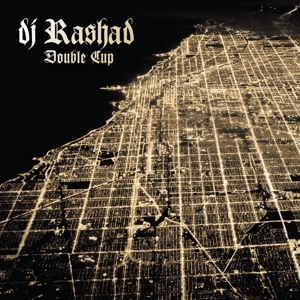 Speaking on his second official LP, Chicago’s DJ Rashad explained that he was intent on collaborating with his Teklife crew. In particular the influence of DJ Spinn, who co-produces no less than eight of Double Cup‘s 14 tracks, is huge on Double Cup.

The immediate consequence is that Rashad’s first LP on Hyperdub is drastically less abrasive, less intense in tone and more leisurely in pace than is customary for Rashad. Of the Spinn tracks, each and all are smooth and easy. ‘She A Go’ makes footwork from slow-jam synth-jazz, while the cruising ‘Pass That Shit’ repurposes the kind of g-funk-inspired r’n’b prevalent in the late ’90s. Then there’s ‘Feelin’ and ‘Show U How’ which, although sporting the album’s most manic use of vocal samples, are nevertheless pure laid back soul in vibe. Pretty soon you realise that the album’s preview single, ‘I Don’t Give A Fuck’, was a massive red herring: a brittle and macabre RP Boo-esque blend of abstract vocal samples and needling percussion with more in common with Double Cup‘s harsh predecessor, 2012’s Welcome To The Chi.

Putting 2 + 2 together, you’d have to assume it is by following Spinn’s lead that Rashad has ventured into classicalist black genres – soul, jazz, afrocentric funk etc – being that it’s these same genres with which Spinn’s footwork style is most synonymous. In a genre with such fluid boundaries, normally this would be no big thing, but when it comes to Rashad it’s a shame. Up until Double Cup, there was a purity to Rashad’s reluctance to go the way of his brethren and introduce other genres, in that while Spinn’s material can be heard as hip hop/soul/funk tracks made footwork, Rashad’s stuff was footwork, plain and simple.

But rather than stick with his own thing, instead he’s corrupted his auteurist vision. The most singular sound in footwork no longer so. Not only that, Rashad’s stuff wasn’t only ‘pure’ in the sense that it seemed self-contained and bereft of outside influences, it was also as if this quality of pureness was reflected in the very nuts and bolts of the music – an unadorned, monochrome, rigorously functional style that seemed almost to fetishise the very workings of the genre, externalising them, almost like footwork’s version of constructivism. And when it comes to footwork, the art is the functional. But on Double Cup, seldom will rhythm – i.e the functional – play a defining role in a track’s overall statement. Admittedly, Rashad was already experimenting with attenuated beat-making and soundscapes on this year’s Rollin EP, but the same approach on Double Cup smacks of a misguided impression that fluidity and serenity equates to credibility. Aside from anything, the album’s glut of southern coke-rap cuts are plain mundane; partly because trap is so horribly over-exposed right now, and partly because footwork sounds unordinary next to any genre you could name.

On the rare occasion that the beats do take precedence on a track, their presence is largely incidental. In these cases it seems that the only reason the beats are there at all is out of necessity, with four-to-the-floor meters functioning solely to facilitate Rashad’s homaging of various four-beat-based styles popular in his beloved UK: deep house on ‘Leavin’ and acid house on Addison Groove collaboration ‘Acid Bit’ (and accordingly – disarranged breaks are the order of the day on the jungle-infused ‘I’m Too Hi’). Granted, eventually said tracks do breakdown into footwork patterns, and sure, the tempos are upped to ghetto house levels of frenzy. But ultimately, these cuts – whether using 4×4 beats or a jungle break – seem like a step backwards compared to the virtuosity of footwork’s percussion programming, forgetting that unexampled interplay between clap, snare, tom and kick that made the genre so pioneering in the first place.