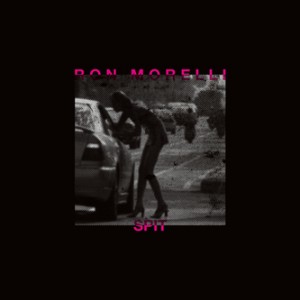 At less than 35 minutes long, and with song titles like ‘Modern Paranoia’ and ‘Sledgehammer II’, Ron Morelli’s debut album Spit is about as no-nonsense as they come. Morelli’s label L.I.E.S. has over the last couple of years unwittingly come to embody something of a zeitgeist in dance music, a raw, filth-caked take on house and techno. But though it’s tempting to slot Spit into the critical chapter of dance music that L.I.E.S. has helped define, its central quality is neither narrative arc nor genre but a lurking, paranoid atmosphere under whose umbrella Morelli experiments with different electronic styles.

They vary from the hardware techno jam ‘Crack Microbes’ and ‘Modern Paranoia’, the tracks on Spit that most closely resemble dance music proper, to the sombre opener ‘Radar Version’ and the hissy noise of ‘Sledge Hammer II’. ‘Fake Rush’ is all raw drum-machine hits and strangled-sounding synths that have all the insistence but none of the joy of dance music, while ‘No Real Reason’ is a bleak bare-bones take on techno that underpins resonant kicks with an ominous bassline.

Listened to in full, the effect of Spit is of fear and claustrophobia, of thickened air and dust-clogged airways. In the text accompanying the release, Morelli calls Spit a “stress record”, and while many of its tracks feel like spontaneous fragments rather than fleshed-out songs, their spontaneity seems born of urgent late-night catharsis rather than freedom. ‘Director Of…’ is built around a synth figure and vocal samples with barely any rhythm section at all, while the oppressive rhythmic noise of ‘Sledgehammer II’ and the propulsive, furred synth lines of ‘Crack Microbes’ are as close as electronic music comes to approximating that deathly feeling of being crammed into a commuter train in the summertime.

Some of these tracks are driven by 4/4 rhythms but Spit is about as far from ecstatic as it’s possible for electronic music to be. This isn’t the communal-spirited stuff of the dancefloor; it’s Music for Social Agoraphobes. Instead of making you move, ‘Sledgehammer II’ and ‘No Real Reason’ invade your personal space. Their gluey atmospheres evoke horror, but it’s the mundane horror of the city at night – specifically, the downtrodden area that Morelli says inspired the making of this album. The closer ‘Slow Drown’ is especially dense and gloomy – its mauled synths whirl and eddy in an electronic dirge, a trebly tone piercing through the murk as industrial clangs mark time.

Initially, Spit sounds just fine, the kind of dusty, heat-warped album you’d expect Morelli to make, though it rejects the instant pleasures of club music for something far bleaker. But go deeper into its hammering beats and deceptively simple loops, and an underlying menace rears its ugly head. It may be a collection of rough and ready jams, but the atmosphere Spit conjures lingers long after the final craggy synth line fades away.