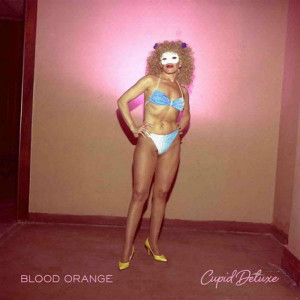 “I want to try everything in the world,” Devonté Hynes told The New York Times, and it shows. In just under a decade, he’s moved from dance-punk (with Test Icicles) to Saddle Creek-styled folk-pop (as Lightspeed Champion) to 80s-facing R&B-new wave mutations (as Blood Orange on Coastal Grooves). With Cupid Deluxe, he’s onto his next set of toys.

The R&B hypnagogia of Coastal Grooves is in full effect on Cupid Deluxe, a record that also ropes jazz, hip-hop, and various flavors of dance music into the mix. While his shapeshifting and genre tourism are seen as disingenuous by some, Hynes’ songwriting chops have generally been unquestioned — until now. Beyond the uneasy percussion, reverb-drenched guitar and wisps of vocals, too many songs on Cupid Deluxe come off as sketches, the “leftovers” (his word) of his songwriter-for-hire gigs.

The finest moments of his career have come from that line of work, namely his collaborations with Solange on the True EP and Sky Ferreira on ‘Everything Is Embarrassing’; the best songs on Cupid Deluxe take that to heart. Hynes weaves his voice with that of female singers (Chairlift’s Caroline Polachek and Friends frontwoman Samantha Urbani, who is also his girlfriend) and he’s always comfortable is giving voice to those whose gender and sexuality he does not share. However, too often a female voice is used to change the tenor of a song like a relief pitcher working in support of a beleaguered starter. It works, but it becomes a predictable trick.

Throughout, there are plenty of signposts and signifiers to the sounds of the 80s, chiefly the sheen of Jam and Lewis 80s pop hits, with bass that pops like bubblegum, palm muted guitar licks, and blown out snares. The formula is strongest on album highlight ‘You’re Not Good Enough’, while the ‘We Are The World’ two-step on ‘Chosen’ is less striking. There are also nods to early hip-hop with some breakbeats and turntable scratches that come off as impossibly dated; if you think rap died in the mid-90s, ‘Clipped On’ is for you. Proto-house fares better: ‘Uncle Ace’ is a breathless, spoken-word dedication to the homeless, LGBT youth of New York that find refuge in the city’s ACE subway lines, and its synth stabs, horn flourishes, and lyrics (“not like the other girls / go home and wait for me… I’m everything you need… I don’t need anything”) come together nicely.

Cupid Deluxe starts strongly with ‘Chamakay’, ‘You’re Not Good Enough’, and ‘Uncle ACE’, but sadly loses focus. In that same interview, Hynes’ nonchalance about collaboration is refreshing (“So we make a bad song. That’s like the worst thing that can happen.”), but it does make one think that some of these songs feel tacked on. Hynes may “have trouble being the face of music [he’s] made,” but he’d be better served by playing to his strengths: lovelorn ballads with female singers are certainly the finest arrow in this cupid’s quiver.