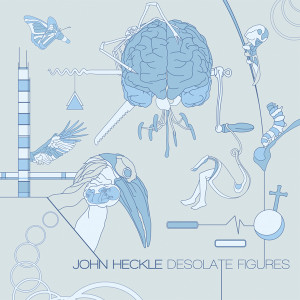 The growing acclaim afforded to John Heckle over the past few years has mirrored a general shift in dance music tastes. Idiosyncratic perspectives on house and techno are, paradoxically, pretty much the norm these days. But it feels like the music of this Liverpudlian producer is coming from a rather different place.

Heckle is best understood as a descendant of Chicago renegade Hieroglyphic Being, who was instrumental in bringing the producer to wider attention through signing his debut EP back in 2010. As with his forebear, Heckle’s sandpaper-rough hardware jams owe a debt to early Chicago house, as well as the mechanised stiffness of Italo disco and EBM. He appears fascinated by these early, thrilling visions of machinic eroticism – visions which might seem rather antiquated to modern ears, but through their obsoleteness have acquired a new kind of poignancy. Sometimes Heckle plays on this poignancy. But, far from dewy-eyed reminiscences, his productions overflow with raucous new life.

Take, for example, ‘Frankenstein’s Sweet Nectar’, a highlight of Heckle’s new LP Desolate Figures. This is boisterous bootstrap Italo, its effervescent synth work fighting to be heard over the surrounding percussive racket. As usual, the melodies are centre stage, Heckle’s restless fingers seemingly intent on launching off the end of the keyboard into the great beyond. The effect is breathless – exhausting almost – but surprisingly emotionally shaded, too.

Desolate Figures is Heckle’s second album and, as with Second Son before it, he tackles the format with gusto. ‘Blindman’s Bluff’, hanging in majestic stasis for most of its length, is an excellent opener; from there we navigate through weirder, unresolved sketches (‘Love-Lies’) and a few spikes of intensity (‘Death Of A Spaceman’ is almost Millsian, though there’s something pleasingly off about it).

Heckle can wring a wonderful widescreen quality from his synths, when he wants to. ‘Inhuman Nature’ is verdant and gorgeous at the opening, before pivoting into something more fraught later on; ‘Never With You’ is more pensive but equally beautiful. Closer ‘Power Of Two’ is dappled and indistinct, as if observed through a tropical fug. Only once – in the interminable blues noodling of ‘Something For Your Distorted Mind’ – do we seem to lose focus.

‘Crazy Metal’ could be an offcut from the producer’s live set, where jacking hardware workouts are pushed to extremes of intensity bordering on noise. That particular porous border is, of course, being probed by plenty of artists at the moment. But Heckle’s real strength lies in the many ways in which he stands apart from his contemporaries. While no radical break from his past output, Desolate Figures represents Heckle firmly in-stride.