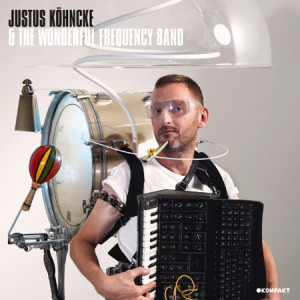 If the title wasn’t clue enough, the opening field recording of Köhncke’s new album – a walk through the rain to the sound of r’n’b harmonica blues and ‘Rock Around The Clock’ – gives an idea of the veteran producer’s intentions for his new album.

Mixing DIY disco, ’90s sensibilities, ‘00s Euro dance and, in one case, a country ballad, the result is a kind of maximal schlager (to this non-German, at any rate). References abound to the house, techno and disco that Köhncke is known for, but all are quickly assimilated as the base for indie band boogie and Kompakt vocal pop songs. It’s ultimately all quite tongue in cheek, with opener ‘Flitter und Tand’ (‘Frippery and Kitsch’) making this particularly plain.

Having also formed Fainting By Numbers with Alexis Taylor this year, references to Hot Chip are apt, this record’s funkier material being of a similarly dry, quirky style and scale. Sometimes this ‘is done well, such as on the Dam-Funk synths, M1 house organ and simple drums of ‘A New Direction’, or the Todd Terje cruise of the instrumental ‘Tell Me’. Elsewhere, Köhncke sounds like he’s channelling the Pet Shop Boys: ‘Das Selbstgespräch’ is a complex arrangement stuffed with ’80s and ’90s pop signifiers, from M1 metal percussion stabs to a really effective travelling chord sequence, and ‘Idee, Prozess, Ergebnis’ takes a wry, jaunty take on house music in a similar manner.

The Hot Chip-like numbers are welcome because most tracks here have too much going on, their promising moments of dance rigour consistently undermined by unbearably plastic synth and drum machine arrangements reminiscent of Native Instruments software demos – a dense European sound of the early 2000s with none of the break-out idiosyncrasies. And don’t get me started on the water drop synth playing unnecessary melodies on nearly every track, its reverb and presence completely out of balance.

In Köhnke’s case it’s particularly frustrating because, while credit must be given for trying something new, there’s a lot in his own 20+ year history that does exactly what this album attempts to do, but much better. His Pet Shop Boys pop isn’t as clever as ‘Was Ist Music’; the dance aspects don’t even touch on the snappy, razor focus of Timecode; and the disco numbers are simply nowhere near as fun as his contribution to Whirlpool Production’s crossover anthem ‘From: Disco To: Disco’ (all the way back in 1996!). Now that is good kitsch.

Perhaps this criticism stems from my lack of understanding of German pop culture, but the way this album comes across is the nightmare scenario for a producer; that as you get older you lose your sense of musical taste, concentrating solely on whimsy. Alternatively, it could be more of a personal humour on show here, or an inside joke shared with friends, which is fine – but is it sensible to release that? Unfortunately, whichever way you try and dress it up, frippery and kitsch alone isn’t enough to carry this album.