Gatekeeper open up about their Young Chronos EP; stream it now 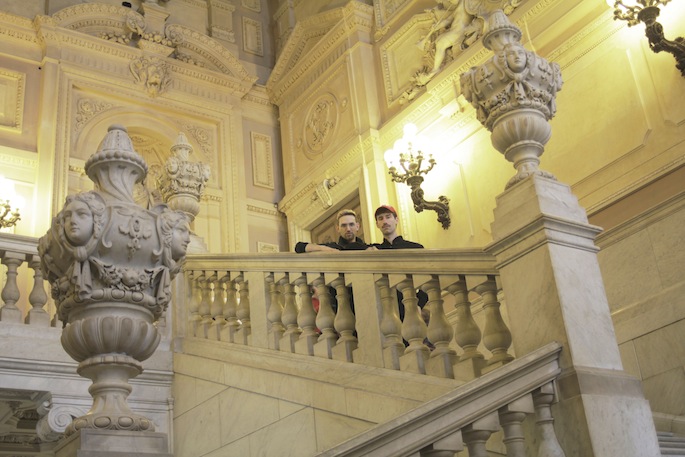 The New York duo adds a Baroque edge to their EBM-meets-John Carpenter futurism.

Earlier this month, Matthew Arkell and Aaron David Ross re-teamed as Gatekeeper for the Young Chronos EP, their follow-up to last year’s expansive Exo. Always with one eye on unorthodox methods of distribution and interactivity, the EP was released via a Pirate Bay torrent and 300 USB sticks (on Lorenzo Senni’s Presto?! imprint).

With The Pirate Bay blocked (to various degrees) throughout Europe, FACT is now streaming the EP — described in trademarked Gatekeeper style as “time-engineering blasphemies and neo-sapient hominid scenarios” — below. We also spoke to the pair via email about the work’s narrative, their inspirations this time around, and what they’re most excited for — and fearful of — in 2014; they didn’t disappoint.

Can you describe the narrative connection between Exo and Young Chronos?

For us there is a strong connection. We like to think of Exo ending with a force that ejects some type of vessel – which makes its way through time and space to land on Earth circa Young Chronos. We use the HD mech sounds from Exo to contrast / re-contextualize the symphonic and more human focus of Young Chronos. The adventure continues…

Between video gamse and Pirate Bay torrens, how much is the medium the message for Gatekeeper?

The medium is definitely the message. The multimedia aspect of our project seeks to explore different release formats – in an experiential sense. We want to create context for what we do, especially since our music can be a bit obtuse. Configuring distribution strategies that match is key, ideally it helping to ease a listener into “our world”…

The press blurb for Young Chronos is phenomenal; any plans to accompany the next Gatekeeper release with a written component?

Thanks! We love it too; it was written by an exceptional journalist who will remain nameless. We’ve always talked about accompanying a release with a novel or short story – we’d love to find the right collaborator / voice actor to make that happen. A disintegrating leper from the 16th century maybe?

FACT once tried (unsuccessfully) to pin you down on which records inspired your work. With that in mind, which film soundtrack, William Gibson novel, and RPG most influenced Young Chronos?