Under a Single Banner 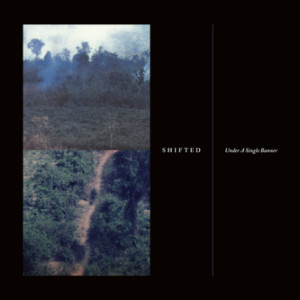 Available on: Bed of Nails LP

Under this particular alias, Shifted (aka Alexander Lewis, Covered In Sand and others) has changed his sound somewhat since last year’s Crossed Paths, but along a familiar path.

Moving away from the rolling drum machines and alternately murky and angular synths that fit him somewhere in the Sandwell District line of techno, his new album Under A Single Banner settles into a voice similar to late-’90s/early-’00s Regis. Looped granular textures and tom-heavy rumblings are now at the fore of these doomy rave boilers, their character earthy but with the edges blown away by reverbs and delays to create a series of bleak, windswept dramas.

As with a lot of propulsive techno, Under A Single Banner revolves mainly around half-bar phrases of minimal, if seismic elements. With this the record consistently hits a problem, as its fairly narrow sound palette and lack of synth riffs limits the character of each track, resulting in a kind of collection of apocalyptic DJ tools.

While fairly homogenous, interesting details are found within the layers: the wet textural LFO of ‘Contract 0’, joined later by an itchy, metallic shaker over its pounding toms; the swells of feedback and possibly-eponymous field recording behind ‘Burning Tires’; or the constant, whipping filter on 808 snares in ‘Pulse Incomplete’.

However, the consistency does have its limits. ‘Suspended Inside’ hints at a breakout with a crumpled high register loop, but the expected change to melody never comes, leaving it a slightly nagging addition. Briefer numbers ‘Core Of Stone’, ‘Under A Single Banner’ and ‘Story Of Aurea’ would all be solid as deep interludes in a mix, but aren’t particularly moving on their own.

Finale ‘Wash Over Me’ does, however, introduce a surprise change of tone, a soft, two-note pad harmony floating in and out over grinding drums and delicate 808 cymbal with all the warmth of a paired down Sandwell District. It’s a welcome move and a good one, suiting Shifted’s current attention. However, its presence mainly highlights the lack of similar material preceding it.

As an album it’s hard to imagine Under A Single Banner being returned to as a striking collection of material, arranged in a memorable way, lacking as it does either full-on utilitarian adrenaline or obvious emotion. But as a collection of tracks, if you are reaching for more British semi-industrial techno these are well crafted and will do the job in your next churning, thundering mix.