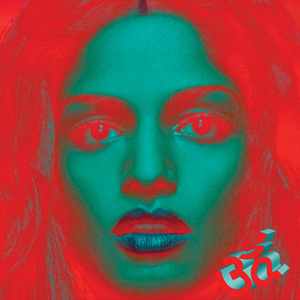 Though, as purported, Matangi takes its name from the Hindu god of rebirth, M.I.A’s fourth studio album is no reinvention. Other than a newly beefed-up low end, there’s nothing here we haven’t seen before from her, and the album’s exceptional quality is also nothing new for the Sri Lankan. Though a marginally lesser album than predecessor MAYA, Matangi is nevertheless dynamite.

Rather, Matangi is where Maya Arulpragasam puts evolution to one side in order to hone what is an astonishing formula. A formula that stands as one of the greatest pop sounds of the 21st century, and truly everything Malcolm McClaren once hypothesised pop could be. The New Pop dream realised, 30 years after the fact, in the wilds of our deep web millennium.

Here is pop music feminine in spirit but masculine in intent, that pays witness to street level culture and also the rarefied environs of the art world, and which is able to employ simultaneously both the genius of black pop and the genius of white bohemianism, and sometimes a mixture of the two – with Arulpragasam’s music drawing often from that cultural tract peculiar to the multicultural slipstreams of inner city Europe. It is pop that plays the game at the same time as subverting it, that’s both intelligent and dumbfuck trash art, and which mines the third and fourth worlds of a shrinking global village without condescension or pity, but rather with the utmost irreverence – a far more fitting tribute to the spirit in which most world music is constructed.

Here is pop music that’s politically engaged but never earnest, that takes the sensibilities of the British underground overground. It’s drenched in attitude, bursting with melody and full of postmodern outrageousness. It’s pop music that addresses the world around it and which, more importantly, is able to capture it, on account of the genius the art school graduate has for portraying the locations she visits during those globetrotting rhythm-safaris of hers. All this, and you can dance to the songs. Dance like shit, in fact.

But hey, forget visionary music-making: what’s really important here is Arulpragasam’s bank balance. By rights, M.I.A. should be handed the key to the city; instead this extraordinary sound has been overshadowed by endless speculation regarding the authenticity of her politics, with naysayers accusing the Londoner of hipster posturing, of cynically co-opting third world causes, and of champagne radicalism. It’s the hypocrisy of hypocrisies, they’ll gripe: how dare a professional pop star have a social agenda? As if The Clash sat around planning military coups between million-selling albums. It’s a decidedly petty backlash, and one that smacks of the fear that the male-dominated music press still harbours of mouthy women. Moreover, it beggars belief that the British press are intent on picking holes in a pop star’s activist rhetoric when the fact that such a thing exists at all in global-level pop music should instead be cherished as some sort of miracle, in an era where political commentary in pop largely died years ago and Beyonce’s brand-managed, “I Am Woman” shite is what counts for feminism in music. Well, Matangi’s terse bullishness suggests M.I.A is keenly aware of this injustice.

At once purring and tense, short prelude ‘Karmageddon’ forms the album’s portentous opening statement, concluding with a warning to Arulpragasam’s enemies. “My words are my armour,” she tells her critics, “and you’re about to meet your karma”. True to her word, from here on in Matangi is out to prove a point, and more often than not succeeds in doing so.

Matangi comes out swinging with the mighty title track: five minutes of electro-eastern agitprop ushered in by a ground-quaking bass rumble and propelled by an insistent pulse of digitised yelps. Beginning with an international missive urging the nations of the world to mobilise, to politicise (“Bali, Mali, Chile, Malawi… If you’re gonna be me, you need a manifesto / If you ain’t got one you better get one, presto”) Arulpragasam’s militant politics blur with her personal chagrin, the result being much sonic gun-toting and, lyrics-wise, a slab of menacing apple-shining boorish enough to blanche a gangster rapper.

It’s closely followed by ‘Warriors’, which plays like an east African militia dabbling in hulking trap, while the brazen ‘Double Bubble Trouble’, though incorporating dub reggae and baile funk, is again essentially trap. Because, in the end, Matangi is all about force and domination. The redoubtable Gaza-rap of former single ‘Bad Girls’, with its Danja-produced mix of holy rage and Valley Girl skeeze-brag, sounds more taunting than ever, while the roaring ‘Bring The Noize’ is Matangi’s resident powerhouse cut. Packed to the gills with baseball bat percussion and vaingloriously garish FX, and named, tellingly, after the eponymous Public Enemy tune, it also features Arulpragasam’s finest ever rap performance, comprising a storm of phonetic acrobatics and ’80s hip hop boasts: “I’m an overweight, heavyweight, female Slick Rick / If you need the trees then my shit’s got stick.”

Granted, Matangi has its fair share of shortcomings, most of them to do with the production. The digi-punk rampage and techno-like pacing of previous album MAYA (see the Suicide-sampling ‘BORN FREE’ and the beat-machine hardcore of ‘MEDS AND FEDS’) demanded virtuosity from its producers – a demand that was met. Matangi’s tone is defined by a kind of pugnacious heaviness, which in turn begets a more crude and stilted production style. The clumsy and basic ‘Y.A.L.A.’ is a prime example: a laboured electrotech ear-sore produced like Tiesto murdering dancehall and characterised by lumpy Moog beats and jarringly choppy structuring.

Lastly, the album suffers slightly from the absence of Arulpragasam’s long-time sparring partner Diplo, with Matangi’s assortment of cutting-edge pop producers and a now lone Switch less adept at translating her creative direction into sonic form. As compensation, however, the choice of Hit Boy to head-up the new hip-hop direction on Matangi is a savvy bit of curation. As the man behind ‘Niggas in Paris’, Hit Boy’s style of lurid big bass insolence is perfectly in tune with Matangi’s fuck-you pyrotechnics, while, as the producer of tracks like A$AP Rocky’s ‘Goldie’, Hollis also specialises in a hyper-real, synthetic style of hip-hop that’s smoothly in sync with Arulpragasam’s surrealistic soundclash schtick.