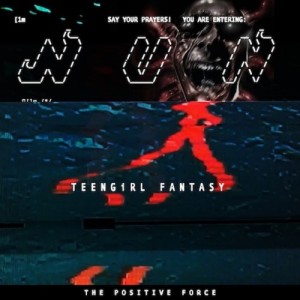 Available on: This Is Music EP

“I think these tracks come from a sort of over-attention to detail,” said Teengirl Fantasy’s Nick Weiss of new EP Nun in a recent interview. As those who have followed the Brooklyn duo’s career to date will know, this does not bode well.

Weiss and partner in crime Logan Takahashi have always suffered, as much as benefitted, from their tendency to overcomplicate things. The pair’s 2010 debut 7AM approached house music’s blissy euphoria at a remove, abstracting its materials to create restless, ever-evolving sonic landscapes. There was a charming scruffiness to it that saw them tagged as part of an insurgent US DIY dance movement alongside the likes of 100% Silk. But save for a few highlights – particularly breakout track ‘Cheaters’ – the whole thing felt a little too fiddly, as if the duo were endlessly prevaricating without ever quite getting to the point.

On last year’s Tracer, that tendency went into overdrive. Eschewing its predecessor’s druggy sample-haze in favour of glistening, hyper-detailed synthetic textures, much of the album unfolded in a frenzy of stop-start rhythms and formless melodic scree. It was a glossier, bigger-budget sound, certainly, but even a string of vocal guests – Romanthony and a then-basically-unknown Kelela among them – couldn’t quite counteract the sense of maddening aimlessness to it all.

So to hear Weiss speak of the that album’s followup in these terms isn’t hugely reassuring. Fortunately, his assessment feels rather off-mark: Nun is easily the most focussed and incisive record Teengirl have released to date. ‘Eric’ is the best evidence of what’s changed. For one thing, the duo seem to have returned to samples: the twinkling chord-loop at the track’s centre lends the whole thing a rich, impressionistic tone lacking in their laser-precise synth compositions. For another, in place of the dependable mechanics of house we’re treated to a frantic jungle-footwork hybrid of the sort that has suffused the dance underground this year. The execution is typically Teengirl – giddy-bordering-on-erratic, and probably not well suited to dancefloor consumption – but the injection of energy is more than welcome.

‘Nun’, meanwhile, cleaves a little closer to past forms – the tempo is slower, and its aqueous synth chords tread familiar ground. But it exudes a pleasing sense of purpose, even when it’s throwing curveballs about the place (the sudden explosion of rave jouissance at ~2.20 is hugely satisfying). ‘Platinum’ and ‘Nun Beat’ are gorgeous too, in spite of their brevity: the former bathes a sluggish hip-hop beat in balmy New Age swell; the latter is the title track chopped and screwed, to blissful effect. In Nun – in spite of what the duo might say – Takahashi and Weiss seem finally to have realised that the devil is only partly in the details.