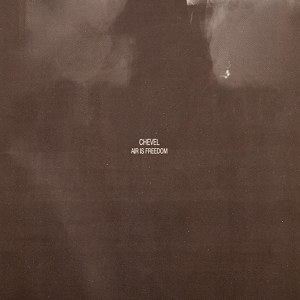 In a year when “outsiders” supposedly set the agenda, Dario Tronchin has slotted comfortably into the techno world. The Treviso-based producer first surfaced as the protege of Stroboscopic Artefacts boss Lucy, and he released an EP on the label – the moody, ascetic Monad I – back in 2010. These days his slower, more sensuous sound has plenty of referents: he’s released on Vae Victis records, home to collaborations between fellow Italians Analogue Cops and Blawan, and has name-checked livejam-leaning Italian house labels like Relative and Restoration.

Cut those labels’ boisterous hardware workouts with the sleeker dynamics of Berghain-approved techno (the club has been a site of pilgrimage during Tronchin’s frequent stays in Berlin), and you’ve got something approaching the Chevel sound. It’s a sound that Tronchin has explored thoroughly of late: his own Enklav label alone has played host to four lengthy Chevel EPs and two LPs since last year. As such, it’s difficult to argue that Air Is Freedom – the producer’s third LP – is strictly necessary. But while there’s no radical step into the unknown here, nor is there a dip in quality, or a sense that we’re being subjected to needless repetition.

Past releases have shown that Tronchin can pander to a peaktime ‘floor just fine but, as the album’s title suggests, he works best when gesturing beyond the stuffy confines of the club. The title track’s high-end synth work twinkles like windchimes in a gentle breeze – a welcome bit of ventilation in amongst the thickets of percussion. Elsewhere, the same glimmering, diaphanous chord sound recurs, each usage more seductive than the last: first in ‘Crossing’, then ‘Lumen’, ‘Nightbus’, and finally ‘Dario’s Diet’, which manages to sound both gloopy and supremely graceful.

Tronchin’s single-take hardware productions are pleasing partly for the tactile roughness of their surfaces, and also for their simplicity. ‘Entanglement’ is where hands-on-faders are most audible, and the whole thing ducks and dives with wonderfully lopsided elegance. The rainswept ‘Hard Times’, meanwhile, is bleaker but similarly well-executed. Only ‘Own’ is more lacklustre beat-tool than skillful exercise in restraint. If we’re comparing Air Is Freedom to the rest of Tronchin’s blossoming oeuvre, then it’s perhaps lacking in outliers. Rediscovery, for example, took in the lambent arpeggios of ‘San Quentin Ave’ and the weird subbass acrobatics of the title track, whereas here Tronchin mostly skulks in the middle ground. Still, if his intention was to say a lot with a little, then he’s succeeded with flair.