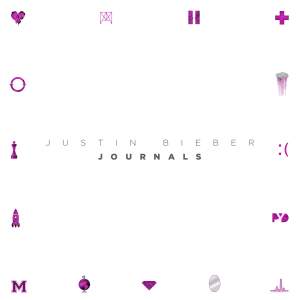 Say the apocalypse happened today and, years later, with the arrival of an alien race, the final remaining representation of humanity was Twitter. The second most followed person on the globe, with over 48 million devotees, would be Justin Bieber. With only smatterings of self-aggrandisement and promises of infinite love for faceless masses that sound like they were churned out by marketing experts rather than the mind of a 19-year-old, that’s a little heartbreaking.

The first reason I bring this up is because after listening to the futuresex-r’n’b of Justin Bieber’s fourth album, the unassumingly marketed and yet astonishingly mature Journals, I’ve got alien races on the brain. The second reason is because a cursory glance at Justin Bieber’s Twitter feed, a bot-like stream of platitudes, promotion and the occasional “I’m quitting music lol jk”, reveals saddeningly little about either Bieber the person or Bieber the musician, instead existing solely as a constant reminder of his brand – the megastar, romantic hero and sometime collectible doll coached by Scooter Braun and Usher from the age of 13.

But Bieber the person and Bieber the musician have been moving in fascinatingly different directions from that core message this past year. While one has spent his time rapidly shedding popularity by egging houses, pissing in restaurants and writing narcissistic messages in the guest book at the Anne Frank House, the other has been crafting the best music of his career.

The first 10 tracks of Journals were released towards the end of last year as Youtube videos; that’s the first weird thing about it. Chronicled as “Music Mondays”, the videos were a promotional strategy building up to the release of Justin Bieber’s Believe, the popstar’s second feature-length movie, but they were so defiantly strange that they slowly became the headline themselves.

The album launches into zero gravity with its opener ‘Heartbreaker’, showcasing a production style that dominates the tracks: chords swim in and out of focus over a low-slung groove and vocals float menacingly somewhere over your head. Compared to the sugar rush of pounding choruses and pseudo-Timberlake / Timbaland chart odysseys that he made his name on, it’s a refreshingly patient take on pop from Bieber, who seems to have discovered space in music – not only the galactic kind, but actual room for movement – and gives his voice plenty of it to roam and reflect around in. There’s acres in ‘All That Matters’, the record’s super smooth lead single, which withholds more than any Bieber single has ever dared to do, pushing the uberstar’s earnest vocal into the limelight over an instrumental that relies on little more than swirling guitar strums and plush bass. And his vocal does most of the work: where you wait for him to lunge forward, he pulls back, sinking to a lower register for the listless, hushed “you’re all that matters to me” hook.

Matched by the Craig David-sampling swoon of ‘Recovery’ and the metallic slow jam ‘All Bad’, Journals’ first half could be summed up as a distillation of classic Bieber. The promises of “forever” are intact but couched in a “bad boy asking for another chance” narrative and offset with moments of abandon that get closer to sexy than Bieber has ever been. Musically it’s all made easier to stomach by being channelled through ’80s/’90s r’n’b sensibilities and stripped of the formulaic feel that defined his earlier hits. It takes its cues from Usher at his calmest, Drake at his drunkest and all the guest rappers and producers – Chance, Future, Lil Wayne, Big Sean, Kid Cudi – at their most sci-fi to create an album that captures a current musical moment in a way that’s more intuitive than even the most cynical listener might expect.

That all said, the maturity of the album is shockingly new from Bieber but not wholly realised. There are flatly unsexual attempts at being sexual (R Kelly skin-crawlingly offers to do “forensics” on your body because “it seems like your man been treatin’ you like a stepchild” in an entirely ill-judged feature) and a heck of a lot of earnest pleading. Skippable moments come in the form of the schmaltzy ballad ‘Change Me’, which drags its feet behind the forward-thinking production of the rest of the tracks, and the embarrassingly literal, Lil Wayne-featuring ‘Backpack’, where Bieber engages with his futuristic theme in a far too Disney sort of way (“Girl I know you must be upset / You lost your family in a wreck”, he sings to his marooned alien love).

But even with all of this, Journals is a resounding achievement. Believe was a coming-of-age pop record that felt engineered by older voices for 16-year-olds – it relied on too-perfectly placed drops, video gimmicks and shipped-in radio-friendly rap verses to create the image of a more “mature” Bieber by moving him to the club. Journals trumps that at every turn with its secret weapon: subtlety. There are dance tracks here, too, but they come in the form of ‘Rollercoaster’, a disco-funk number with skittering interludes that muse on the loneliness of long-distance loving, and ‘Confident’, a triumphant single that moulds itself around an erratic and exuberant feature from Chance the Rapper.

Tellingly, Journals is the only Justin Bieber record to not feature a photo of Justin Bieber on the cover. Instead, we’re offered a border of symbols and emoticons set against a white backdrop. Whether this is because the album was hastily and cheaply marketed by a label who didn’t want to push it, because the marketing team were attempting to cash in on the Kanye and Beyonce-led trend for minimalist album artwork, or because Bieber is consciously trying to enter a new adult phase of his career, the outcome is the same: the listener is being offered a blank slate. Say aliens were to find this album. Instead of all the branding and the merchandising and the chatter, when everything else was gone they’d get a phenomenally different picture of the same human being.