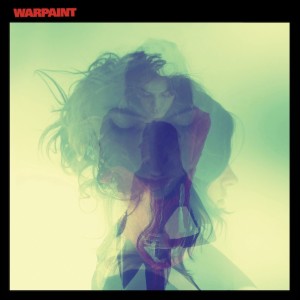 In reviews for their 2010 debut The Fool, there was something suspiciously over-eager about the blanket championing of rock act Warpaint, almost as if the entire music press had rushed to validate the L.A. band merely on account of the quartet’s uncommon all-female constitution, coupled with the fact that – holy condescension, Batman – these women could actually play. In the end, all this untempered endorsement served to divert attention from the band’s many shortcomings, and the fact that The Fool was a mediocre record.

At times dryly technical, at other times little more than a proggy recalibration of The Cranberries, for the most part The Fool seemed content to take its cues from the most banal and self-indulgent aspects of slowcore, while leaving aside the genre’s chief asset: its uncanny knack for conjuring thick atmosphere from the barest arrangements, making sadness seem almost narcotically appealing. The Fool‘s core problem, however, lay with the band’s reluctance to stylistically pick a side – to be firmly one thing or the other. Or indeed anything at all – this indeterminateness ultimately rendering their music nondescript. The final outcome was that The Fool‘s aesthetic lacked definition, while what personality the songs did have was, at best, faint.

On Warpaint’s second album this quality of faintness has been corrected. All in all, it’s as if the watery concoction of before has been distilled into a potent musical treacle – richer in atmosphere, sharper, artistically decisive and intoxicating. Whereas The Fool was inert and draft-y, Warpaint is insistent, dynamic and pressurised, carried along on an unbroken current of sustained tension and immersive mood.

This more saturated sound pays dividends throughout the record. Though not the first trip-hop-informed track they’ve attempted, ‘Hi’ is the first atmospheric enough to really nail the genre’s low-lit dread. The fatalistic and theatrical ‘Love Is To Die’, meanwhile, is downright succulent in atmosphere, more akin to the hyper-romantic cinematic noir of Goldfrapp than post-rock. Then comes ‘Feeling Alright’, with the juxtaposition between the back-line’s gently funking gait and the ghostly defeatism that makes up the rest of the song producing an effect infinitely more distinctive and penetrating than anything on The Fool.

Opening track ‘Keep It Healthy’, with its spidery Kid A-style drum patterns, telegraphs the band’s newfound urgency, while ‘Go In”s Caribbean-inflected bric-a-brac recalls The Raincoats in slow motion. Elsewhere, ‘Disco // very’ harks back to the agitprop avant-funk of disco punks Delta 5 – and just for the record, both tracks appropriate the post-punk style far more organically than Savages. Then there’s ‘CC’. A hyperventilating tempest of a song, icy but febrile and surging atop a kinetic percussive clatter, it possesses an intensity that The Fool could never have housed, the track’s sense of agitation and hysteria offering a more overt form of vitriol than on the band’s debut.