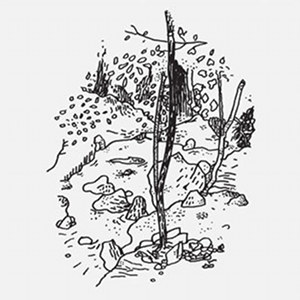 STL is one of those artists whose discography is so vast as to actually be an obstacle to enjoyment. Confronted with the dozen-odd albums and numerous singles Stephan Laubner has released under the moniker since 2003 (that’s ignoring the off-dancefloor work he’s put out as Lunatik Sound System), it’s difficult to know where to start. This impression is not helped by the music itself, which is best understood as an endless series of variations on a handful of themes. Blunted percussion, layers of field recording-derived hiss and cryptic, atonal melodies recur. Much of this material has been released on Laubner’s own Something imprint, and while he’s rarely put out a weak release – and often touched brilliance – there is something of a vanity label whiff to the whole thing. Laubner could probably have put out half the quantity of records and still said everything that needed to be said.

Still, the result is that Laubner has created an aesthetic world all of his own – one with its own internal logic running parallel to that of dance music at large. In this respect he invites comparison with Chicago’s Hieroglyphic Being. Both take a high volume, low filter approach to releasing their music – one which could have been inspired as much by the noise scene as by the dancefloor (Laubner has also released extensively on CDr, and often dabbles in field recordings and drone work). And Laubner is nothing if not, yes, an outsider – there is remarkably little press on the guy in spite of his decade-long career, and he remains based in the Harz region of Germany, far from any of the country’s clubbing centres.

That said, Laubner’s dancefloor tracks still tend to exhibit DJ-friendly characteristics – their long, drums-only leads and tails are a dream to mix, even if the grooves they outline sometimes aren’t. It’s presumably this quality that pricked up the ears of Hamburg label Smallville, who have been responsible for raising Laubner’s profile through a handful of releases since 2009. Tracks like ‘Silent State’ and ‘Neurotransmitting Clouds On The Secret Freeway’ offer up an exceptionally reduced vision for deep house in line with label regulars like Lawrence and Christopher Rau. Both reappear on At Disconnected Moments, Laubner’s first full-length for the label – indeed, his first full length for any label other than his own. And both merit the recap; the latter in particular is a minimal gem, its subdued UFO chords burbling on into infinity.

These two tracks function as crisper waymarkers in a record mostly shrouded in fog. Laubner’s template of choice is dub techno (far from a first – he even put out a record called Dub Techno Explorations a few years back), and his take on the form is, as usual, fantastically oblique. The likes of ‘One Day’ and ‘Good Wine’ build on the static-drenched aesthetic of vintage Basic Channel; the former to blissful ends, the latter with surprising aggression. Odder still are ‘Scuba’s Motion Dub’ and ‘Amelie’s Dub’, whose hooks are so deeply buried in the mix as to almost escape notice altogether. Elements that do begin to surface slip back into their murky surrounds just as quickly, almost as if Laubner is trying to escape our attention rather than court it.

It’s a fascinating effect, but one that doesn’t exactly invite casual listening. None of the album does, in fact. And with five of these tracks being over 10 minutes in length (meaning that the whole record runs to almost 80 minutes), all this stringent minimalism can start to be a drain. A couple of shorter tracks – ‘Good Wine’ and fuggy pointillist closer ‘Over And Out’ – nod to Laubner’s beatless work, and provide some welcome respite. But otherwise it’s that same old STL story: not one of these tracks is bad, but there are still too many of ‘em.