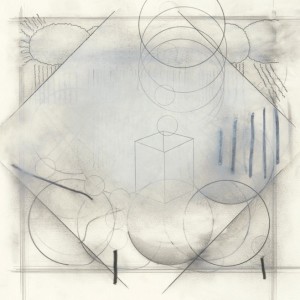 Actress’ 2012 album R.I.P. was grand in scope, tackling life and death, good and evil, Milton’s Paradise Lost and the Book of Genesis. Its follow-up is only a tad less high-minded. But where previously Darren Cunningham addressed the shared myths of Western civilisation, here he seems to be exploring – and perhaps laying to rest – his own self-constructed folklore.

The press material accompanying Ghettoville outlines, in spectacularly pompous language, what sounds like a severe spot of musicianly fatigue. “Ghettoville is the bleached out and black tinted conclusion of the Actress image. […] The demands of writing caught the artist slumped and reclined, devoid of any soul,” it declares, before ending with the statement, “R.I.P. Music 2014” – itself, of course, an Actress insider reference as much as it might be a retirement notice.

There’s a clue in the title too: as in some epic cycle, we appear to have returned to the site of Cunningham’s 2008 debut Hazyville, except this time it’s rundown and deserted, a dilapidated husk of its former self. “A big part of this album is about homeless people, in a way,” Cunningham said in a recent interview. “Drug addicts, broken down… I just saw one sprawled out, sleeping on a concrete floor. Almost dead!”

Preceding single ‘Grey Over Blue’ perfectly evoked just such an enervated landscape, slowing Cunningham’s usual cryptic loop-wizardry to a deathly crawl. We pick up from much the same place here; opener ‘Forgiven’ is seven and a half minutes of what sounds like some arid post-punk instrumental down-pitched to within an inch of its life. Its dullness is almost oppressive – a challenge, perhaps, to the casual listener. Abandon all hope, ye who enter here.

This forbidding atmosphere persists throughout the record’s first half. ‘Street Corp’ reprises the rather affectless icy repose of parts of R.I.P., while ‘Contagious’ is more slow-mo japery, its sampled drums decelerated until they resemble the roar and shriek of tortured metal, like some kind of industrial accident happening in bullet-time. The shuffling ‘Rims’ could be an offcut from 2010’s more vivacious Splazsh, except for a striking passage in the middle, 30-odd seconds of just kick-snare-kick-snare, a workmanlike trudge through a silent landscape. Frankly, it’s almost too much. An entire album of this stuff would certainly constitute the “fuck you” gesture Ghettoville’s press material claims it to be.

Fortunately, somewhere around the halfway mark the mood lightens. As per the usual Actress formula, there is the odd moment of near-dancefloor kinesis: the treacle-ised disco-house of ‘Gaze’, say, or ‘Skyline’, whose four-four groove struggles pluckily against the background hiss, and almost – almost – wins. But Cunningham explores other forms of dynamism, too. ‘Image’ is a brilliant smoke-haloed boogie edit. ‘Rap’ uses those now-familiar down-pitching processes to more joyful ends; you sense Cunningham is luxuriating in its sludged loops, rather than letting them play out into the dead-eyed void. Closer ‘Rule’ sounds sloppy and dog-tired but happy, too.

Perhaps it’s a matter of contrast, but these hints of optimism are what stand out. ‘Our’ is exquisite, its twinkly synth chords exhibiting an Aphex-style whimsy. And when the frail chipmunked vocal in ‘Don’t’ sings, round and round, “Don’t stop the music”, there’s a bleakness to it but a certain soft wonder too. Perhaps it was intended as a spur to a jaded Cunningham (it’s tempting to imagine him blasting the loop in the studio each morning before getting down to work). Ghettoville might chronicle a dark patch for Actress, but once it hits its stride it’s as good, and as full of life, as anything he has produced. It’s certainly not the sound of a musician on the verge of retirement (go on Darren, prove me wrong).