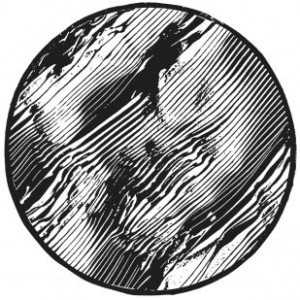 It seems to me that there are two extremes dominating UK club music currently: the well (and the over) produced house and techno offshoots at the one end; and the DIY, visceral and challenging offshoots at the other. As someone who’s always hovered between the two, it regularly makes for a strange situation because I naturally err towards the latter, but there’s only so much dancing I can realistically manage to nosebleed 909 kicks.

It’s interesting though, because for a scene that must seem so dour and humourless to an outsider, there is a distinct channel of anarchic fun under the aggression. Last year I had some of the best nights of my life at gigs by men and women ranging from the angry to the academic, purely for the amount of times I ended up crying with laughter for reasons I can no longer recall. And not one of them had an obvious moment like Regis donning Marigolds, threatening to fist someone, or dropping the Dad’s Army theme tune.

I mention this because Container’s new Adhesive EP on Liberation Technologies sounds far more like the actual nights I’ve spent chatting utter bollocks and giving myself whiplash than a lot of the pummeling that soundtracked them. Despite how abrasive it is – constructed from cone-splitting drums and layers of harsh, buzzing cacophony – it’s a fun record of adrenaline-fuelled electronic punk. Sonically, comparisons can be made to Regis, Pete Swanson, some Drexciya and the kind of electro Helena Hauff plays, but for attitude see the dark humour that often underlies Suicide, Ministry and Frak.

At the extreme end of this, title track ‘Adhesive’ begins as breakneck schadenfreude techno, all snarling bass, distorted bubbles and high pitched squeals, but the beat shifts into industrial thrash for the second half, the upper registers whinnying like sirens. Similarly, ‘Slush’ revels in scathing noise gestures, but complements them with a surprisingly cooled, dubby joyride at 130 bpm.

The EP’s other half is two 150 bpm jump-up biker gang numbers, a style that should only be danced to shoulders and neck first. ‘Complex’ gleefully pounds out a Motorik beat with brittle overdrive spikes. ‘Glaze’’s one-note bassline cycles against the rigid drums and offbeat handclaps whille a single bristling line of raw electronics transforms and squawks over the top.

Adhesive isn’t exactly the cyberpunk ‘Ace Of Spades’, but it’s rock solid. And alongside the weird funk of others like Powell and Prostitutes, I think I’ve pretty much pinpointed the sound of my transition from affable to lairy. More please, immediately. This round’s on me.