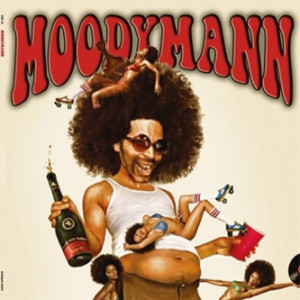 After physical copies pretty much evaporated upon touching shelves, Moodymann’s latest, eponymous album has finally seen a digital release. In the interim however, Moodymann has inflated wildly, now standing at a monstrous 27 tracks in length through a generous stuffing of media samples and, in typical Kenny Dixon Jr fashion, a bunch of material that has already seen release.

As a kind of home listening sequel, this version of the album plays out as one of Dixon’s signature collages, a loose, constantly shifting pastiche of moods and tempos, with jazz references and Detroit-themed clips used as pointed transitions. ‘Werk’, ‘IGuessuneverbeenlonely’, ‘Watchin U’, ‘Heaven’, his (bizarre) remix of Lana Del Rey’s ‘Born To Die’ and the flawless, if 5-10 years old ‘Freeki Muthafucka’ all pop up along the way.

Of the new material, there is plenty that’s good. ‘Jimmy D…Nickle’, ‘Hold It Down’ and ‘Sunday Hotel’ all showcase effortless KDJ style, with masterful sampling of blues, jazz and soul and some particularly inspired chopping of Latin percussion. As usual, familiar FX and instrumentation sound completely different under his control, all layered and rearranged into unexpected shapes. Even his subtle production of Funkadelic’s ‘Sloppy Cosmic’ – a misleading title for the moving, 12-minute psych-blues spiritual that it is – breathes some new life into a group who haven’t been on form for a long time.

But really, Moodymann has only one new epiphany, and that is the Andrés guest production ‘Lyk U Use 2’. Over 185 bpm MPC soul, similar in many ways to Andre 3000 and Kelis’ ‘Millionaire’, Moody hectors a lover on how they’ve changed, his delivery becoming genuinely uncomfortable as he first questions, then begs, then finally sneers.

Elsewhere momentum quickly sags, requiring regular injections of familiarity from older numbers to sustain interest. The tension of ‘No’ can’t be criticised, but Dixon’s vocoded lyrics mainly loll around in sleazy minimal house territory, with only a dash of his best wit. Andrés’ relaxed 2-bar vamp ‘Come 2 Me’ is placed awkwardly at the height of the record, and the following track ‘Ulooklykicecreaminthesummertyme’ only hits its stride 4 minutes in, before quickly meeting a skit from Richard Pryor. Despite ‘Radio’ sounding like Splazsh-era Actress and ‘Got Dem Freaks Wit Me’ reminiscent of Outkast, both are easy to let slip by rather than reflect on how weird they are.

Moodymann’s length and arrangement is a real hindrance – so much so that I actually prefer the 13-minute minimix preview, its different sequence and rapid cuts giving the album’s material an angry, pulsing energy that this 76-minute version lacks. Realistically, Dixon probably only considers the vinyl release to be definitive, and that’d be fair. Its digital cousin may also be fun, but by this stage is a bit too drunk to fuck.