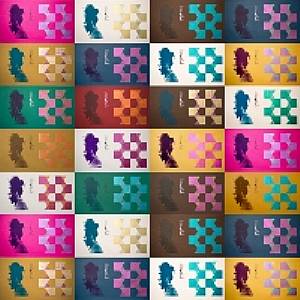 Available on: Which Way

A recent Guardian piece described Andrew Ashong as part of a new generation of male soul singers, alongside the likes of Disclosure collaborator Sam Smith and Drake samplee Sampha. This seems to do a disservice to the music of Ashong – a Forest Hill native with roots in Accra, Ghana – which belongs to a different, more localised movement.

Ashong operates on that cosmopolitan but distinctively LDN axis (we might, yes, call it a soul axis, but there’s more to it than that) which includes young entities like Peckham’s Rhythm Section and Dalston’s NTS radio, the legendary Plastic People (we’re talking the Theo Parrish and Floating Points residencies), and veteran broadcaster Gilles Peterson. Ashong has rubbed shoulders with all of these institutions, whether as a DJ – his cratedigger mentality yields a rich chronology of funk, soul, Latin music and weird interstitial rarities – or a producer, collaborating with Theo Parrish on his debut EP Flowers (its title track was voted track of the year at Gilles Peterson’s Worldwide Awards).

The three tracks on Flowers were a neat reflection of the producer’s vintage-leaning potpourri of influences, though they opted for lopsided DIY charm rather than accurate retro-pastiche, for which Ashong clearly had neither the budget, the musicianly chops nor, one assumes, the inclination. This, of course, is to his credit. There is something deeply weathered and mature about Ashong’s music, yet it is also wonderfully naive. He comes across as a reluctant singer, someone who has been forced to commit his own voice to record only for want of having, I don’t know, Roy Ayers in his address book. His reedy tenor doesn’t take to the limelight easily, but that’s a big part of its appeal.

Still, Special, his second EP, shows that Ashong is growing in ambition. Where Flowers felt like a sticky-tape-and-string affair, the producer has got himself sounding more like a legit band this time around (he performs with live musicians these days – perhaps they were involved). Acoustic guitar is replaced by scratchy electric (laying to rest any erroneous comparisons to folk), and joined by bass, dextrous rhodes and rather profesh-sounding drums. The mix is mostly bedroom-dry still, but Ashong often slathers his voice with effects – perhaps as a concealer, though this serves a dramatic function too. The title track’s thick delay-soup perfectly complements its sultriness; on ‘Never Dreamed’ it serves to accent the weed-haze, a refinement of the stoned head-nod of Flowers highlight ‘The Way She Moves’.

Ultimately, though, these differences are surface. Underneath you’ll find the same winsome simplicity (all three of these tracks are just two chords, round and round), and the same delight in the small prettinesses of arrangement (‘Special’’s shimmering multitracked vocal harmonies are wondrous). And while these tracks are more concise, they still find plenty of time to dive deep into their grooves, preferring endless gentle repetition to tension and release. Closer ‘Love The Way’ loops the tongue-tying refrain, “What I’m trying to say is that I love the way that you love me”. Ashong basks in his love; we bask in its reflection. It’s not much, but it’s also more than enough.