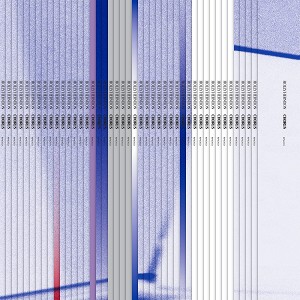 Few artists in popular music are as vocal advocates of the laptop as performative instrument as Holly Herndon. Her live performances, where she records and processes not only her voice but also the sounds of her computer’s inner workings in real time, blur the lines between the input of her breath and vocals and the output of her laptop so effectively as to render the division between natural and synthetic redundant. On her debut album, Movement, she explored the interplay between humanity and technology against a background of throbbing techno, concerns she revisits on her new EP. Chorus is informed by the conviction that the laptop is a performative instrument, and the political, aesthetic and practical implications of that premise.

‘Chorus’ opens with a deep throb, a crisp synthetic shatter, and polyphonic vocal snippets arranged with such precision and space they sound as if they’ve been laser-cut. In an interview with Rhizome, Herndon summed up her intention to “try and represent the hard cuts and sharp transitions between environments in online browsing.” To achieve this effect, she sampled her own voice along with Skype conversations, Youtube clips and other fragments that made up day-to-day browsing, arranging them into a pristine choir that distills and splinters her individual identity into a wealth of data.

‘Chorus’ isn’t quite a pop song, nor is it quite a dance track, though Herndon adopts certain aspects of both. At first, fragments of vocals and synthesised sounds provide the rhythmic framework, then act as a counterpoint to the track’s driving percussion. The central hook, to me, embodies the mundanity that the technological and browsing experience encode: muscle memory, the intimate knowledge of my own computer’s flaws, and my almost automatic daily use of the same sites and applications. To my mind, ‘Chorus’ is so effective because the hook that embodies the familiar also highlights the jarring quality of the transitions between vocal components and rhythmic elements. It’s as though Herndon has given form to the act of flicking between innumerable open tabs, activities and applications.

That the only lyrics I can discern are “I can make you…” underlines the more sinister aspect of the browsing experience. The devices that enable us to work, communicate and entertain ourselves are increasingly used as conduits for government surveillance. It’s a subtext to ‘Chorus’ that I may be projecting entirely from my own deep-seated fears regarding privacy and surveillance, but that I can do so illustrates the ambiguity that makes the track so endlessly compelling.

‘Solo Voice’ is starker than ‘Chorus’. It consists almost entirely of Herndon’s vocals, processed into splinters and flecked across a bright blank expanse. Its hookless and sparse composition on the one hand stands in contrast to ‘Chorus’, while at the same time crystallising that song’s latent menace. Where ‘Chorus’ holds up the dazzling possibilities of communication, ‘Solo Voice’, with its polyphonic choir of one, drives home the fundamental isolation of laptop use, and its effect is deeply disquieting.

You could throw a few reference points in current music at Chorus – the glittering surfaces of Arca’s production, the rhythmic and timbral complexity of Autechre, or the Oneohtrix Point Never’s recent album R Plus Seven – but they hold true on only unsatisfying, superficial levels. Herndon is quite unique, using her instrument to engage in a constant dialogue with her immediate environment in such a way that makes conventional divisions – between the natural and the synthetic, or between the everyday and the extraordinary – seem dated.