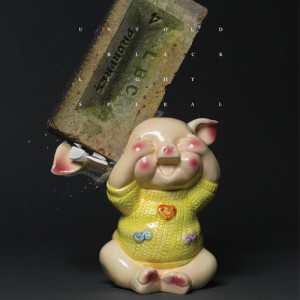 “I’m making tunes to be played in clubs – it’s design not art,” Jack Dunning memorably declared in one of his earliest interviews. The former web designer has long brought his training to bear on the music he makes as Untold; as with all good design, the vivid, strange contours of his tracks never come at the expense of (dancefloor) functionality. Indeed, the two often complement one another: the singular oddness of a track like ‘Anaconda’ is all the more satisfying because it still bangs in a club.

Well – no longer. A gnarled, confrontational record, Black Light Spiral might just mark the death of Untold the designer. Gone is his usual razor-sharp synthetic sound palette to be replaced by grot and distortion; gone are the DJ-friendly tops and tails in favour of gleeful left-turns and moments of confused stasis; and gone is the voracious hybrid approach that has made Dunning an evergreen figure in British dance music over the last half decade. Instead the producer’s debut album sees him turn inwards, creating a sealed and forbidding world with its own strange internal logic.

Granted, the eagle-eared will notice passing similarities with the Berghain-approved techno style Dunning has been exploring since 2012. The way ‘Drop It On The One’’s sample loops are gradually overwhelmed by scarred bass tones recalls the glacial forward momentum of a track like ‘Motion The Dance’. And ‘Doubles’ could almost be called techno proper, though its sounds are queasily out of joint. But most of these tracks only reach stable states in their closing passages, as if the moment when Dunning’s ideas find clarity is the very point when he gets bored and shuts them off. In other words, for the first time, Dunning seems more interested in process than outcome; in the struggle with his material rather than his eventual conquest of it.

Of course, such an approach is, by its nature, hit and miss. Not every track here is essential – ‘Hobthrush’ in particular feels overlong and rather po-faced – and the violent jumps in intensity between tracks can sometimes make for frustrating listening. But even if the results aren’t always satisfactory, you have to admire Dunning’s ambition: namely to bypass all that stale left-brained thinking and tap straight into the howl of the subconscious. ‘Sing A Love Song’ and ‘Strange Dreams’ are torrents of unrestrained id; the latter in particular is preposterously brutish, the mix pumped up and up until all that’s left are what sound like the farts and grunts of a dying amplifier. At the other extreme, ‘Wet Wool’ trades in sinister, dreamlike restraint, its layers of hiss and frayed synth lines trembling with cryptic grace.

All of this seems inseparable from the context in which the record was made. Thrown together in a hot London July and inspired by the idea of “intense pressure, heat [and] steam,” it’s difficult not to hear the simmering violence of an urban summer in these tracks. Opener ‘5 Wheels’, with its terrifying cacophony of sirens, and the crackling flames of closer ‘Ion’, play directly with the signifiers of dread, emergency, massed panic. If Black Light Spiral feels, ultimately, like a half-expressed statement, then perhaps it’s because that’s precisely the level on which these lizard-brained emotions operate.