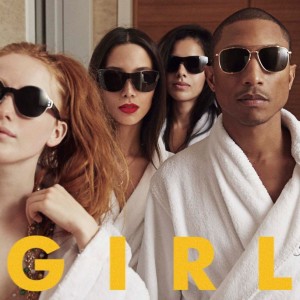 Considering his recent ubiquity, it’s shocking to think how close Pharrell Williams came to pop irrelevancy. By the end of the aughts, the Neptunes had lost their hitmaking sheen and Pharrell was reduced to releasing N.E.R.D.’s diminishing returns, scoring Disney films and launching a “content-driven property” (remember that?). By the end of 2012, a few credits with Kendrick Lamar and Frank Ocean aside, Pharrell looked to be headed to the Island of Misfit Producers.

How quickly things change when Robin Thicke decides he wants his own version of ‘Got to Give It Up’. Pharrell produced, co-wrote and featured in Thicke’s Song of the Summer and kept the momentum going with his appearances on Random Access Memories — quite the one-two punch. He closed the year with the underwhelming and inoffensive throwback ‘Happy’, a song that has become a worldwide hit and could win an Oscar this weekend. “We are preparing to launch Pharrell as a global solo superstar in 2014,” said a bullish record company exec when the song debuted. “’Happy’ is just the beginning.”

‘Happy’ is also the first single off Pharrell’s short-notice second album G I R L, and that press release boilerplate should have been a giant red flag for anyone with high hopes for it. After his brush with irrelevancy, it’s clear there was no way Pharrell was going to turn G I R L into a second In My Mind, an almost completely forgotten album that fumbled his last chance at making the jump from second-billed to headliner.

If Pharrell’s recent success has taught him anything, it’s that you rarely score big by being original. 2013’s most monstrous hits, from ‘Blurred Lines’ and ‘Get Lucky’ to Justin Timberlake’s 20/20 Experience, were all shameless in their retro-fetishism and pushed units by keeping one eye on Baby Boomer nostalgia and the other on the bank. Is it any surprise that G I R L follows the same template?

From the orchestral string intro of ‘Marilyn Monroe’ to the funk-rock jam session that ends ‘It Girl’, G I R L is 45 minutes of warmed-over retro-pop pastiche, cribbing from Michael Jackson and Chic, from disco and yacht rock. Mostly, Pharrell is content to approximate dance floor fillers from the ’70s and ’80s; at his worst, he rehashes the more soulful and innovative material he made a decade ago.

Which is to say nothing of the album’s half-assed female empowerment theme, supposedly a response to the backlash to Thicke’s ‘Blurred Lines’ leering. No matter how saccharine his falsetto, it’s best not to think too much about Pharrell’s lyrics, which range from idiotically benign (“let’s dance and elevate each other”) to deceptively gross (“I promise not to abuse you”) to downright predatory (“Just because it’s the middle of night / That don’t mean I won’t hunt you down… If I can’t have you, nobody can”).

The various features don’t bring much to the table, either, whether its fellow MJ impersonator Timberlake or Alicia Keys doing her ‘Girl on Fire’ schtick on ‘Know Who You Are’. Predictably, Pharrell reunites with Daft Punk for ‘Gust of Wind’, a successor to ‘Get Lucky’ in that it’s just as vacuous and seems to persist for twice as long as it should. Pharrell is supposed to be the super-producer of our age, and these are the collaborators he calls up?

Of the guest spots that could be interesting, major-label-survivor JoJo is relegated to heavy breathing on a hidden track, and nothing says timeless like a song with “bae” in the title and Miley Cyrus on the hook. Last year, Kanye rapped that he wanted to “pop a wheelie on the zeitgeist.” On ‘Come Get It Bae’, Pharrell and Miley warn that if you’re “gonna pop a wheelie… don’t try too high,” which seems to be the operating principle here. One of this generation’s finest talents opting for paint-by-numbers retro-pop (no matter how bright and shiny) when his old records still sound like dispatches from the future is heartbreaking. It might have worked for Robin and Justin, but say it with me: “I know, I know, yep, yeah, you too / Okay, everybody meet Mr. Me Too.”