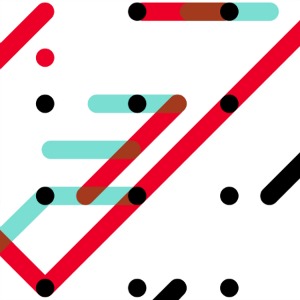 While in New York last year I went on a binge, buying up as much late ’80s East Coast music as I could carry. One purchase was Trans Lux’s ‘Big Apple Noise’, a mediocre mastermix with an excellent flipside. ‘Street Noise’ was the entire A-side simply reversed, and it became a strange, dense, rippling structure with far more character than the original.

In a way, it’s a neat comparison to Russell Haswell’s 37 Minute Workout. In keeping with Diagonal Records’ rampaging club music, the album explores a middle ground somewhere between warped DJ tools and studies in the classical instrumental sense, exploring the technical possibilities of an instrument. And, surprisingly, Haswell’s main instrument is the 808.

For someone so deeply rooted in noise and techno (i.e. hardware, computers, 909s), it’s an interesting choice with an unexpected result. Predictably, tracks are built from distorted kicks, snares, hi-hats and layers of scathing noise, but Haswell sounds… well, weirdly East Coast. Driven by stop-starts, abrupt exchanges and long streams of broken pulses, there is something of the undead Extended Edit to his rhythms.

Still, if any semantics of the ’80s 808 have travelled with it, 37 Minute Workout is like that unfortunate teleporting baboon in The Fly, turned inside out by the process. Only ‘Alternate Ways To The Truth’ keeps things relaxed, an almost contemplative familiarising with the 808’s features. Elsewhere, ‘Unknown Harm’ could be a malfunctioning soundcheck for M.C.B., while ‘Scratchy’ combines old school spring delay and wet filters for a fat-spitting shallow fry, before its ‘Freeze Dub’ cracks apart under sub-zero laser beams.

‘Spring Break Extended’ samples the calamitous sound of a city Miami-style, but chops and juggles it through harsh DSP. The clipped shots of ‘Blast Beats’ are like skipping through two CDs at the same time, and ‘Incalculable Harm’ is a sustained, red-lining explosion sidechained to fitful, distorted kicks.

But there are other tracks not so focused on rhythm. ‘Neutrino Hunter’ skims noise over an elastic supersaw. Respects are paid to Coil on ‘In Memorium Of Elph’, a register-bending peristalsis of jagged synths. ‘Convalescence’ ends the record on a drone halfway between voice and AC hum. And while the two parts of ‘Chaos Clapping’ may be a drum machine homage to Steve Reich’s ‘Clapping Music’, they are delivered in a cloudy style more like Ligeti’s use of chaos theory. Or even Haswell’s own Wild Tracks field recording of snow falling on a microphone.

While full of brutal Haswell trademarks – screaming frequencies, guttural sonics and liberal overloading of the master channel – it’s a curiosity of a record; unexpectedly playful, even. With more producers currently trying their hand at beatless numbers, Haswell has opened up a nice antithesis, quietly sidling up to dance music’s box-banging history and forcefully grappling its beats off the revered grid. If you want to hear, and even play out rhythm trax with the splattered, chaotic energy of a Hieroglyphic Being DJ set, 37 Minute Workout is a certified sweat inducer.