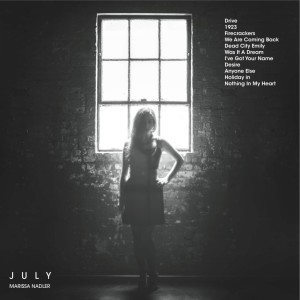 Darkness and gloom have become something of a common aesthetic pose these last few years, so it’s always refreshing to find an artist who wears the black naturally, and without pretence. Marissa Nadler is one of those artists. Hailing from suburban Massachusetts, she put out her first LP, Ballads Of Living And Dying, on Eclipse in 2004, a release that saw her lumped in with the freak folk/New Weird America movement. In fact, though, her music is far from peculiar or outsider, largely drawing on a few classic North American touchstones: the mordant folk of Leonard Cohen, the hippy Americana that emerged from Los Angeles’ Laurel Canyon, and the gauzily beautiful dream-pop of Mazzy Star.

July is Nadler’s seventh album, and her best yet. In large part, this simply down to improved songwriting. Once, Nadler sang songs that sounded like old death ballads dragged from their caskets. Her new songs feel more rooted in the here and now, but are no less heavy in the delivery: intimate little mini-dramas that, often cryptic of narrative but thick with emotional resonance. Many are set on the road, sung as if narrated from some lost highway or lonely truck stop. On ‘Drive’, a late night drive is fortified by music and alcohol, faces illuminated by the glow of cellphones. On ‘I’ve Got Your Name’, as Nadler ponders a collapsing love affair, she notes “the road was studded with Christmas trees”. Others come from a place of beautiful despondency: see ‘Dead City Emily’, where she sifts through a wreckage of what-ifs as “colours on the trees/change from red to green”.

So yes, fine songs. But in part, though, a little of the success of July should be attributed to producer Randall Dunn, a man more commonly to be found producing the likes of drone-metal trailblazers Earth or the atmospheric black metal group Wolves In The Throne Room. That’s not to suggest that July is heavy – it certainly isn’t. But Dunn has a neat command of space, and knows just how to place Eyvind Kang’s gliding strings, or Steve Moore’s iridescent synths, so they gently transport Nadler’s ethereal, fingerpicked songs without disturbing their waiflike (sometimes wraithlike) delicacy. Dark, then, but not pitch-black. After all, what’s shade without a little light to place it in relief?