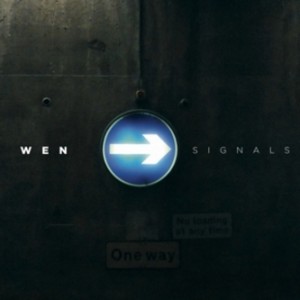 Journalists love a hook from which to hang their adverb-laden coat, and in Wen’s case that hook is vocals. Specifically, grime MC chatter sampled from ’08/’09-era radio sets – this being the period when the Kent-raised Owen Darby was enthusiastically discovering the style through radio and online forums. Knowing this biographical tidbit, these minuscule snippets of vocal take on a certain emotional significance; perhaps they even reflect a desire to re-examine a bygone musical era. If the press release for Darby’s debut album is to be believed, that’s only the start of it. These samples, it explains, are the “signals” from which the record takes its name, radiating out from inner city London to a global audience; they are “nodes in a spacious neural network”, addressing “power, locale, identity, intent, inequality, sexuality, gender, diversity, energy”.

Such a reading chimes conveniently with the broader aesthetic of the label releasing this album, Keysound. It suggests that the album should be filed alongside Dusk & Blackdown’s Margins Music, LHF’s Keepers Of The Light and LV & Joshua Idehen’s Routes in its desire to map the cultural geography of London. It also feels spectacularly heavy-handed – particularly considering that only half of Signals makes more than passing use of such samples. The other half reflects, as Darby has said himself, a desire to move beyond what has become his most “recognizable trait”.

Instead, Darby’s interaction with his heritage involves a much subtler play of musical signifiers. As much as the fractured beats and menacing string figures of grime, he draws on UK funky (in the rolling latter half of ‘Persian’) and the baleful flex of El-B-style garage (‘Lunar’, ‘You Know’), all of it underpinned with the glowering sensibility of mid-’00s dubstep. The resultant circa-130bpm productions are impressively sleek and distinctive for such a new producer. Indeed, as with much of Keysound’s new school, refinement is their defining characteristic; far from roughshod experiments with new ideas, they navigate smoothly between established styles, favouring subtle ingenuity over brash innovation.

This, of course, is not necessarily a bad thing. But where last year’s Commotion felt concise (by definition, it being an EP) and tightly coiled, the greater demands of the album format have not been kind to Wen’s music. There are moments of dynamism, like the excellent quivering steppers’ bassline in ‘Time’, or ‘In’’s disemboweled grime-pulse sounds. But even these tracks feel weighed down by a relentless paranoiac mood that soon begins to tire, their gestures sparse and restrained in a manner that’s presumably meant to be evocative, but often just feels unadventurous.

Fortunately, things do pick up in the closing minutes. The title track, with its soca-inflected rhythms, is a rare moment of raucousness, and ‘Nightcrawler’ shows just how extreme Darby’s collage approach can get. Even better is ‘Play Your Corner’ – largely due to the involvement of the album’s only live vocalist, Riko Dan, who brings new purpose and propulsion to proceedings. In fact, given the acres of space typically found in Wen’s beats, and how much more exciting this track is than many of its companions, you might be left wondering why Darby didn’t opt to include more vocal spots. As it is, this one is too little too late. The press release describes Signals as “language-dense”; in reality much of it feels proficient but rather empty.