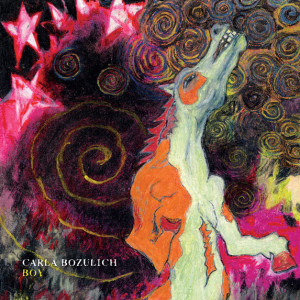 The trajectory of Carla Bozulich’s career has always been intriguing, from the incendiary rock of The Geraldine Fibbers to more esoteric records under the Evangelista alias. So her reference to Boy as a “pop album” in the text accompanying the release is unexpected. In reality, a few hooks do not a pop album make; they do, however, give a more accessible structure to Bozulich’s songs.

Instead of the stark arrangements of the Evangelista records, Bozulich here embraces pop structures and a sometimes oppressively full palette. ‘One Hard Man’ is an early highlight, all coarse guitars, the sickening crunch of feedback and Bozulich’s vocal hardened into a brittle, staccato shout. Elsewhere, repetition gives the music a bleak potency, as on ‘Don’t Follow Me’, which opens with dry percussion and ratchets up into a half-spoken tower of song.

As you’d expect from an album that was written and recorded over two years and in four continents, Boy displays a pretty wide range of styles and moods. At times it’s so heavy it feels as though Bozulich wants to crush you with sound and affect; at others, it’s almost spacious and inviting. ‘Gonna Stop Killing’, with lyrics that describe the reformation of a killer sung over scrawling noise and viola, is a funereal blues song, and the gloomy ballad ‘Drowned to the Light’ is particularly moving, Bozulich’s voice wavering above winding guitar: “No sound defined her / No story to tell.” It’s all tied together by her knack for pushing and pulling words into jagged shapes. Her voice is what ultimately makes Boy such a thrilling listen, from its almost silky quality on ‘Danceland’, to the rawer, more urgent tone on songs like ‘One Hard Man’.

She returns throughout Boy to the theme of the story, and as such there’s a temptation to view the album through the prism of Bozulich’s own biography, especially as the lyrics touch upon addiction. But take a step back, and the lyrics resonate and refract experience in a way straight autobiography seldom does. The febrile blues-rock opener ‘Ain’t No Grave’, with its “Can’t hold me down” refrain, and ‘Deeper than the Well’ – “I got a lot a more stories I can tell / Yes, the hole is deeper than the well” – leave a prevailing impression not of Bozulich’s own life, but of a spirit that resists all efforts to be tamed, one that wants “to fuck the whole world.”

Unfortunately, Boy is slightly front-loaded, so the most potent tracks are sequenced towards the beginning, and the less intense ones towards the end. As a result, ‘Lazy Crossbones’ and ‘Danceland’ make the album feel as if it’s tailing off, though the closing track ‘Number X’ has the opposite effect, building from a spare guitar and vocal arrangement into a monumental and dense song that pushes against the album’s final boundary. This may be Carla Bozulich’s take on pop music, but Boy is rarely anything short of cathartic.