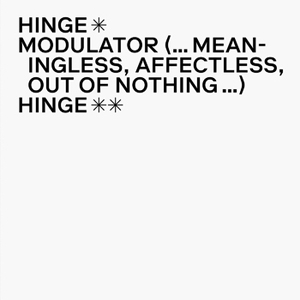 I’m no expert – as may swiftly become clear – but even from a layman’s perspective it appears theory is in a pretty hard and unforgiving place at the moment. The speculative realists are trying to delete human experience out of existence, former CCRU maverick Nick Land and his neo-reactionary Dark Enlightenment mates are looking to cram into an escape craft and blast off to planet White People Only, and where all this thinking intersects with music isn’t in, say, the supine mutations of the hardcore continuum, but hard-edged computer music designed to test – and perhaps obliterate – your puny senses.

In this arena, of course, Florian Hecker has form. A German sound artist whose practice touches on algorithmic software processing, computational linguistics and psychoacoustics – broadly speaking, a study of the way we hear and perceive sound – Hecker was one of the wave of disruptive, challenging laptop musicians to emerge from the Mego stable around the turn of the century (see also Russell Haswell, Kevin Drumm, and Mego’s own Peter ‘Pita’ Rehberg).

Much of Hecker’s recent work takes place in gallery spaces, his music played through massed loudspeakers to chart its effects in physical space. This new album, Articulação, has spun off of an earlier gallery work, Chimerization, which debuted in 2012. Like Chimerization, Articulação is a collaboration with the Iranian philosopher Reza Negarestani, a thinker in the vague orbit of the speculative realists. Negarestani has written a libretto, a theory piece wrestling with the idea of the “chimera” – a scientific or mythological fusion of distinct and disparate parts. On opening track “Hinge*”, this piece is intoned twice by the experimental vocalist Joan La Barbara, with the two recordings then overlaid and intermingled. One reading represents “nature”, the other represents “culture”, with the hinge of the title intended to join to two. Sometimes the readings echo one another, sometimes they deviate. Sometimes La Barbara speaks, sometimes she speak-sings with unusual intonations. Sometimes, one track is treated with crackling distortion, or skips out with a crackle of static.

Negarestani’s libretto is dense in the extreme. Here’s a taste: “The accelerative culture of modernity is a full-fledged programme of acceleration through which the horizon ceaselessly alludes to new dimensions and acceleration the epistemical performative spirit of the modernised culture operates as a synthetic operation over incommensurable cultural dimensions and orientations…” And so on, and on, for 25 minutes. There are immediate and urgent questions. Should we focus on content, or delivery? Are we supposed to rake through these recitations and unpick their meanings, or to lose ourselves in the pandemonium of voices? Certainly, it’s easy to let meaning slide through your grasp and focus on the unheimlich vocal interplay; Hecker makes use of the precedence effect, a binaural technique separating sounds by a short delay that is just beneath the ear’s echo threshold. The effect is deeply strange, and far more “extreme”, taken in the broadest possible sense, than any number of modern schlock noise heads.

The album is completed by two other pieces. “Hinge**” is another spoken piece, this time featuring the voices of Sugata Bose and Anna Kohler, but this time the intent more plainly seems to be that of obliteration. “Modulator (… meaningless, affectless, out of nothing…)” is a wide-ranging 29-minute piece of imposing computer music that apparently exposes some of the second piece’s inner workings. As a whole, Articulação is imposing, bewildering and unpalatable, yet on its own terms, strangely magnificent. As food for thought, both a binge and a purge.