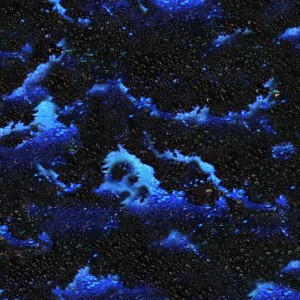 After formulating a unique sound, it takes a certain kind of self-belief to then immediately ditch said creation for release #2. That his talent allows such luxuries bodes well for Evian Christ. Most artists can go entire careers without ever conjuring a sound of their own, but with Waterfall’s template of trap, trance, and distortion, the sound of Kings And Them has indeed been kicked to the kerb. As Evian Christ told FACT last month: “I just didn’t wanna be that ambient guy right now.” Fair enough.

The constant is Evian’s ability to make exhilarating music. Visceral and pumped-up where the debut was cerebral and light-footed, clearly Waterfall is designed to light a fuse under big room crowds. Hailing from the Hud Mo school of bombast, and flecked with vaulting Rustie-a-like pyros and exploded Hecker-style levels, ‘Salt Carousel’ is an aptly named merry-go-round of attitude, crunch and sparkle, all industrial textures and elephantine bass. ‘Fuck Idol’, meanwhile, is a real nasty little shit of a track. With the trap sub-bass infused with noise, then further ill-ified by Prurient-like percussion and ragga vocals, it’s like some lost cut from Kevin Martin’s ‘too evil for public consumption’ folder.

‘Fuck Idol’ is followed by the relatively less aggro ‘Waterfall’, which does a great job of splicing Luger-isms with the post-noise hymnals Oneohtrix Point Never puts out: a novel conflation if ever there was one. ‘Propeller’, meanwhile, is Leary’s part return to the field of deconstructionist rap, but of a different kind to Kings And Them. This time there’s no vocal sample flips or Roland FX, but the anchor is a boom bap rhythm, which Leary has fun alternately undercutting, subverting and supercharging using a variety of incongruous foils: helium ‘ardcore-style FX and power electronics.

Waterfall is not without its flaws, however. Overall, Leary appears unable to put together more abrasive fare without compromising some of the compositional finesse that impressed on Kings And Them. All bully, no ballet, the tracks are sometimes blocky and staggered, which has a way of frustrating the music’s momentum, and by extension its power. Maybe the jarring ugliness is all part of the plan, enabling Leary to shock us with eruptions and hair-pin turns. But the great thing about Kings and Them was Leary’s knack for combining impact with fluidity – on Waterfall, the balance doesn’t quite seem right. More of a step sideways, then, but one which keeps us very much interested in what comes next.