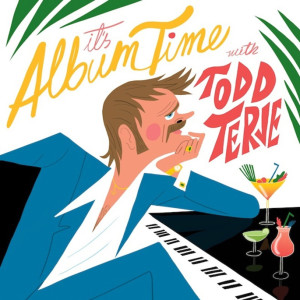 Here’s a question I was asking myself prior to hearing It’s Album Time: should Todd Terje have made an album? The Oslovian producer may display an almost frightening ability to turn out summer anthems (2011 – ‘Ragysh’, 2012 – ‘Inspector Norse’, 2013 – ‘Strandbar’), but that doesn’t mean he’s got a long player in him. In fact, given how close those tracks came to perfecting the cosmic Scandi-disco formula, is there even much more to be said? But of course, anyone enjoying a run of form like Terje’s is likely to have a crack at the format sooner or later. In the album’s schlocky intro track, a voice (presumably Terje’s own) recites its title over sunkissed guitar chords and a fulsome disco beat. There’s a razzle-dazzle jubilance to it, but it’s also a wry acknowledgement of that inevitability: “well, you’ve heard the singles – now it’s album time”.

Terje knows what’s at stake here; he knows what we’re all expecting. When the first chuntering Eurodisco bassline enters – halfway through track two – it creates a moment of hush, as if the celebrity guest has just made his entrance. Later, ‘Strandbar’ appears in shortened form, and ‘Inspector Norse’ is the closer (because how could it not be?). There’s a new pretender to the cosmic ‘floor-filler throne too, in the form of ‘Delorean Dynamite’ (with preposterous epic ‘Oh Joy’ coming a close second). The unending motorik bassline, the enormous chords, the heart-squeezing late-game key changes – they’re all from the textbook, though there’s a wondrous yearning quality to it that sets it apart from its predecessors.

Elsewhere, however, It’s Album Time turns out to be much less of a victory lap than we might have expected. It’s more of a prog extravagance, in fact. There are live instruments everywhere – drums, strings, woodwind, all handled with real skill – and a newfound taste for suite-like structures. The meandering lounge stylings of ‘Leisure Suit Preben’ meld seamlessly into ‘Preben Goes To Acapulco’, whose cosmic boogie is briefly, naggingly reminiscent of Herb Alpert’s ‘Rise’ (though it soon wanders off to explore other terrain). ‘Swing Star’ parts I and II display an equally keen sense of beyond-the-dancefloor narrative.

Granted, in places you might find yourself wishing Terje had kept his more wayward tendencies in check. The bracingly corny ‘Svensk Saas’ and ‘Alfonso Muskedunder’ riff on Terje’s beloved jazz-fusion, falling somewhere between fellow Nords Jaga Jazzist and Weather Report; or perhaps between the Avishai Cohen Trio and that breakdown in Chick Corea’s ‘Spain’. Those who consider 7/4 time signatures an unnecessary extravagance might find these moments difficult to stomach (the key change in the closing 30 seconds of ‘Alfonso Muskedunder’ is particularly eye-watering). Still, they’re so manicured and bright-eyed that it’s difficult not to admire them.

In fact, the album’s only technical weakness comes from an outside source. ‘Johnny and Mary’, a cover of Robert Palmer, is Terje’s attempt at an 80s power ballad. It’s a fine idea, and the hi-def arrangement is nice enough; unfortunately Bryan Ferry’s desiccated delivery is just unpleasant on a basic level. Vocal number aside, It’s Album Time is an impressively balanced and varied record. It’s frequently excellent, and entertaining even when it feels like it’s gone astray. Sure, you might switch off partway through ‘Inspector Norse’ – this is your seven thousandth listen, after all – but who can begrudge our man a little bit of self-congratulation?