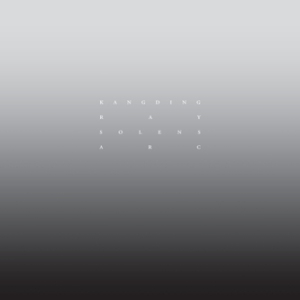 As Kangding Ray, David Letellier has steadily grown in stature and accomplishment over the last eight years, and his fourth album, Solens Arc, continues this progress in cinematic style.

Half billowing noise, half rolling Germanic techno, it’s a dramatic, black and white sound in high contrast. The album particularly develops some of the textures found in more recent EPs, now sharing characteristics with Shelley Parker, Peder Mannerfelt and Emptyset. Snarling, paper-ish noise flutters at tracks’ edges. Long, gritty phrases get thrown out as slow boomerangs. Foggy layers of distortion are almost Drexciyan in the way they spill around.

But the half of Solens Arc that thunders behind this is techno of a more familiar European style, and it contains a few of its recognisable anachronisms. One in particular is the soft ‘boop boop’ melodies washed in delays (see ‘Amber Decay’, ‘History of Obscurity’, ‘Son’), which I simply can’t hear in any production and not think of a phone network advert – there’s just something about this technique that sounds ’90s and corporate to me.

The album’s best moments are its most ambiguous and surprising, and there are many of them. The synthetic snake pit didgeridoo interlude of ‘Apogee’; the Shackleton-meets-T++ tribalism of ‘Blank Empire’; or the slow-burning pace and grimacing metallic noise of ‘Serendipity March’.

Elsewhere, ‘Evento’ has a flying rhythm with offbeat (dare I say, ‘funky’) snares for dashes of brighter colour. ‘Transitional Ballistics’ carries an anguished, crumpled synth horn melody like something from Burning Star Core’s Challenger. ‘Crystal’ is a tense cut of Carpenter-esque synth anxiety that, as one of the album’s highlights, works far better than its starry counterparts.

There’s a lot going on at any one point. And while the record’s trajectory is smooth, working much like an archetypal Euro techno DJ session, the experience is broken up by alternating between longer potboilers and shorter reflective pieces. It therefore feels more like a live set, and longer than its 51 minutes. Overall though, Solens Arc is a painstakingly crafted record that manages to both defy expectations yet retain the familiarities of techno, Raster Noton as a label and Letellier’s own music as Kangding Ray. That’s no mean feat.