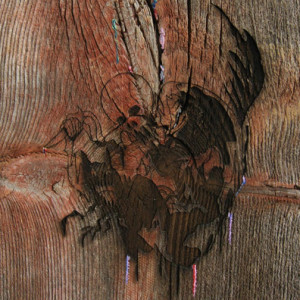 Dave ‘Avey Tare’ Portner’s solo work has, so far, paled when placed next to that of his Animal Collective partner Panda Bear. The latter’s 2007 album Person Pitch was a gentle revelation, submerging tumbling Beach Boys-style vocal harmonies in deep lagoons of echo and reverb, a sound that Animal Collective would further explore and expand on their breakthrough album Merriweather Post Pavilion. Portner, meanwhile, has used his solo beat to explore gloomy catharsis (see 2010’s Down There) and bewildering sonic trickery (2007’s “backwards album” Pullhair Ribeye, recorded with then wife Kria Brekkan of the group Múm), the results occasionally diverting but next to the work of his parent group, hardly memorable.

His new band Avey Tare’s Slasher Flicks, though, feels like a project fit to stand on its own two feet. Conceived during a bout of convalescence at home between tours, Portner found himself sketching out a number of new songs on acoustic guitar. Rather than recording them alone, though, he decided to work them into a new group, with girlfriend Angel Deradoorian (formerly of Dirty Projectors) on keyboard and Jeremy Hyman (a free-leaning percussionist who has played with Ponytail, Dan Deacon and The Boredoms) on drums. There is an entertaining shtick – “A group of three hippies on a road trip through the backwaters of 2013’s rural music scene fall prey to a murderous cannibalistic band” – and press photos of the three posing in rubber masks wielding kitchen knives. This doesn’t, as you might expect, feed into a sort of Animal Collectivised take on Death Waltz horror disco, but Enter The Slasher House is shot through with a sort of giddy, fairground malevolence: more Scooby-Doo than Suspiria.

The trio format works out. Portner’s songs are febrile and sprightly things, a character that’s easily compatible with Hyman’s skittish, energetic drumming, and augmented nicely by Deradoorian’s gloopy synth melodies. There are moments of hysteria – the breathless synth-and-drums battery of ‘Blind Babe’, or ‘A Sender’, a breezy romp in the vein of ‘Summertime Clothes’ sped up to delirious pace. The production, too, is a peculiar thing, effects spilled liberally across the frame so that synths and guitars ripple and voices take on a mutant croak. But Enter The Slasher House is perhaps slightly more formally conventional than much of Animal Collective’s music, its formula less volatile. There are plenty of verse-chorus moments, and often it’s more Kermit The Frog than Animal: see the Afropop yodel of ‘Catchy (Was Contagious)’ or ‘Little Fang’, a cute pop bounce that began as a song about Portner and Deradoorian’s kitten, but gradually transmogrified into a song about raising a werewolf.

The result is a strange paradox in typical Animal Collective style: a suite of songs that’s at times alien, other times sentimental; often cutesy, but a little too bristly to curl up with under a blanket. Probably it won’t be a crossover hit in the same way as, say, Person Pitch, but Enter The Slasher House is certainly Portner’s strongest extra-Collective material to date. More in this (open) vein please?