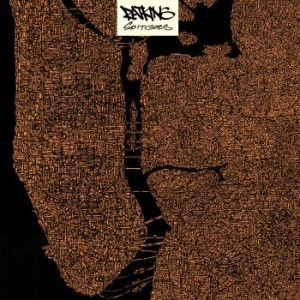 With the Kurt Vonnegut-referencing So It Goes, Ratking follow 2012’s Wiki93 with another refreshingly unconventional release. Unfortunately, the Manhattanites’ long awaited debut long-player isn’t quite as spectacular as their EP suggested it would be.

The star of the show here is undoubtedly Wiki, one of the group’s two rappers. Though far from a great technical rapper, what Wiki’s MCing lacks in virtuoso tongue-twisting it makes up in pure personality. On Ratking’s debut though, what made the trio such a revelation was the production. Here, Sporting Life – the group’s producer – is something of a double-edged sword.

On the one hand his approach is quite brilliant, in that with his cacophonous soundscapes, all clamour, clutter and unnatural frenzy, he makes So It Goes a true New York album – evocative of time-lapsed avenue traffic, of that forever turning metropolis, of that balance of anxiety and exhilaration. The songs are things of built-up density, arching wide and high like the Manhattan skyline, gazed upon from the pavement looking upwards. Brass samples conjure the eternal conversation of car horns and sirens, and the waltz of light and movement.

Then there’s the jazz. New York’s lingua franca, on So It Goes flourishes of woodwind and trumpet honour New York’s great tradition of jazz-infused rap acts, from Stetsasonic to Gang Starr. It comes as no surprise that So It Goes is produced by Young Guru, engineer to another great New York album in The Blueprint.

The sun-bleached ‘Snow Beach’ resurrects the New York of Biggie Smalls but without having to resort to clumsy old school reference-points, channelling the vibrancy and relative innocence of an era that seems now almost utopian. A collaboration with Peckham’s King Krule, ‘So Sick Stories’ is pure backpacker: samples and organ loops dominant and blunted-out flows the standard, while lyrically the M.O. is wall-to-wall city poetry. ‘Eat’, meanwhile, a gently melancholic ballad structured around shabby loops, is clearly influenced by Krule’s romantic punk-troubadour-meets-grime style.

But alas, what we gain in atmosphere we lose in practicality, in that this same sonic bustle often cramps the mix, more often than not to the detriment of the songcraft. Many of the songs here lack definition, with hooks and memorable phrase obfuscated by a MIDI-maelstrom of micro-events and hyper-layered backdrops. It’s a classic case of all emphasis is no emphasis.

There’s often a disconnect between the production and what’s going on vocally, the two elements at times even working at cross purposes. This was maybe the intended effect, what with the trio citing no wave post-punk – a genre that relished dysfunction – as one of their primary influences. But avant or not, the production robs the rapping of the nuance, punctuation and accenting that more conventional beats might have afforded. You get the feeling that much is lost in the confusion of ‘Canal”s inexpressive blare of disembodied diva cries and wailing distortion, while the shrill ‘Remove Ya’ is similarly woolly: an artless mess of pseudo-dancehall and half-formed club-rap ideas.