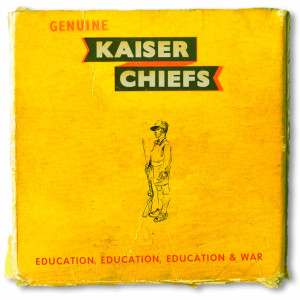 I can’t tell you what a massive kick in the dick it was to learn that old Ricky Wilson was back on the scene, after appearing to have finally shat his broken-faced abomination of a band into the rubbish compacter of musical history three years ago.

In the kick in the dick stakes, this old dick’s seen its fair share of action of late. Jake Bugg – have a bit of that, dick. Palma Violets – Goodnight Vienna. King Krule – KAPOW! And Mumford & Sons, somebody pass the cheese-grater. But nothing compares to the pounding an already-ailing British indie scene is due to take with the return of the country’s worst guitar band.

Befitting of such a dreary album, we begin at ‘The Factory Gates’, the opener a heinously prosaic take on indie’s most heinously prosaic thematic standard – the much-used ‘living for the weekend > slave to the wage’ trope. Driven by that old familiar lads-on-tour meets-Benny Hill-rhythm (self-parodically, there’s a later track entitled ‘Ruffians On Parade’) and slathered in music hall organ (Wilson’s idea of Brit irony, because not only is he a cheeky chappy and really, really working class, he’s also a winking subversive), the song lurches leadenly between starchy hook-as-jingle verses and forced choruses, followed by a boiled cabbage of a middle eight, more wheezing dynamics, more turgid arrangements, some inane shouting and, to finish, a high octave repetition of the already annoying chorus in service to a numbing fade-out style coda, as is the Kaisers’ tried and tested formula. Somewhere Tim Lovejoy is texting Chris Moyles: “Track 1, Moyles-y – they’re smashing it. LEGENDS!”

The lyrics are at best perfunctory, at worst an insult to anyone who isn’t a total nork. “What you make on the factory floor / you take straight to the company store” barks Wilson, ”…til they cant break your will anymore / you’re contractually tied to death’s door.” The working classes should count themselves lucky to have such a worthy champion. “I never left the town I was made in / Wicker’s World, Michael Palin.” Eat your heart out Morrissey.

For the rest of its running time the album continues in much the same vein. Education Education Education & War is the long-player as Presbyterian Sunday: the only sound to be heard in the grey half-light of popping fires and scorched hearth rugs; the click-clacking of Old Mother Wilson’s knitting needles.

The coldly calculated, emptily triumphant ‘Coming Home’ is your garden variety encore fodder bands like the Chiefs shit out regularly, just so the poor proles have something to sway along to at closing time. What would the common people do without Kaiser Chiefs, eh? Well, they’d probably be listening to hardcore, jungle, UK garage, grime or one of the many other working class-born music forms to come out of Britain in the last 30 years, but those just aren’t as worthy as white heterosexual men with guitars. It’s a stylistic hodge podge of a song, made up of James-like light melancholy, fat Britpop guitars (for the chorus), thin The Edge-style lines (for the verses), small town Northern nostalgia and, last but not least, the Gallagher special – a tritely climactic, horribly obvious guitar solo to tie it all together.

On ‘Misery Company’ the Kaisers do glam-rock like every lad band does glam-rock – sexlessly, boorishly and with as little of Bolan’s wit, verve or freak-scene exoticness as is humanly possible. ‘Meanwhile Up In Heaven’, the band’s pitiful attempt at ‘spacey’, is essentially an Oasis song but for the mindlessly incongruous beat (because sampling Churchill and the theme music for Johnny Briggs would have been too obvious). Vocally, Wilson is doing his best Liam Gallagher impression, while ‘Your mind is the key / it is the key that sets you free’ is undoubtedly his lyrical nadir – far, far more horrible on record when you hear how Wilson squeezes the words into a lumpy cadence just so they can prime yet another wet fart of a ‘euphoric chorus’.

‘My Life’ is tuneless, tepid and breathtakingly bland (and this from the band whose past hits include ‘Everything Is Average Nowadays’ – it seems Wilson has a knack for irony after all), while the interchangeable ‘Bows And Arrow’, as well as sounding like a bit like The Enemy covering Magazine – something I wish I could unhear – is about the most unconvincing call to labour revolt since the dawn of recorded music. It’s always the way with these bands, ever since some bellend at Select compared Oasis to the Pistols they’re all so desperate to assure us of their punk credentials, or say a few GRRR! ANGRY things on songs while making music as punk as Tim Henman.

That’s followed by the truly most execrable track here – ‘Cannons’, a nightmarish farce of atrociously disjointed songwriting, cynically contrived, laughably remedial anti-war rhetoric (“We’re going to need a lot more cannons, if you’re going to be home by Christmas”) and a jarring and queasy combination of facetiousness and sickly pathos. I fucking hope they do play this to the troops overseas – to a room full of under-slept, paranoid Megadeth fans with no future, horrible guns and an approach to killing best described as artisanal. I predict massive head trauma and a colostomy bag for life.

Closing track ‘Roses’ is essentially Wyatt’s ‘Shipbuilding’ for fans of Roy ‘Chubby’ Brown, full to the brim with forced poignance, faux-concern and sixth form poetry. I’d like to think Wilson handles the lion’s share of his bleeding heart activism from the set of The Voice. But this is unlikely. Fuck the Kaiser Chiefs and their devastatingly forgettable music for making modern life that bit more mundane. We don’t deserve this.