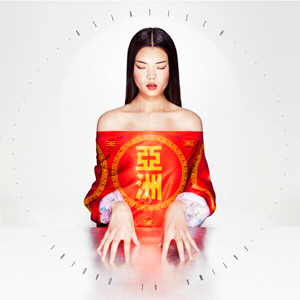 For an artist releasing their first LP, you don’t get much braver than opening with a four-and-a-half minute cover of Sinead O’Connor’s ‘Nothing Compares 2 U’ sung in nonsensical Mandarin and sounding as though it was recorded in a karaoke-bar-cum-monastery. For Fatima Al Qadiri, this is par for the course. ‘Shanzai’ is the baptism of fire that welcomes the listener to Asiatisch, Al Qadiri’s debut album on Hyperdub, and one that sets out to fill its listener with that familiar-not-familiar feeling from the very first digitised teardrop.

Al Qadiri is a conceptual artist, but she’s also enormously talented at expressing disparate concepts in her own unmistakable voice. Initially introduced as Ayshay via her WARN U EP for Tri Angle in 2011 – in which she warped traditional Sunni and Shi’ite a capellas that were familiar to her from her childhood – she soon began releasing projects under her birth name to make sure her own identity wasn’t clouded by her conceptual experiments.

Her next release, Genre-Specific Xperience on UNO, created audiovisual homages to a handful of genres including hip-hop and Gregorian chant. In writing, it’s the least cohesive release imaginable, but in sound, Al Qadiri’s deft way with at once re-creating and alienating the familiar was the crux of the work, and resulted in trippy anti-jams like ‘Hip Hop Spa’. Again, in her 2012 Desert Strike EP, which re-imagined the 1990 Iraqi invasion of Kuwait through the sonic palette of a familiar video game, she depicted something far removed from her past releases – something unimaginable for most Western listeners – and brought to it a sonic signature of brutal, hard-edged sincerity that made it unmistakably her own.

All this brings us to Asiatisch, where the opening ode to Sinead O’Connor – heard through the filter of a Western imagination of a Chinese interpretation – is at once totally strange and totally Al Qadiri. The album’s concept is of a Chinese mythology and history conjured by outsiders, as expressed through a musical tribute to the much-maligned early-2000s subgenre of sinogrime. The title means “Asian” in German, and the tracks all have a foreignness that is not innate to a particular place, but to a global idea of that foreignness itself. So ‘Shanzai’, the title of the ‘Nothing Compares 2 U’ cover, refers to China’s knock-off culture of slightly distorted fashion brands, recognised the world over; the suitably choppy ‘Wudang’ refers to a classification of martial arts, known to millions of non-martial artists as the preferred fighting style of RZA, GZA and the rest; ‘Shanghai Freeway’ and ‘Shenzhen’ refer to industrialised areas of China that hold the roots to the country’s blooming economy and population.

Once ‘Shanzai’ floats away into the ether to leave you wondering if it was all a strange dream, Al Qadiri’s signature grime influences, all synth-brass swarms and sinister vocal injections, come into play with force in the album’s epiphany moment ‘Szechuan’ (a track that’s named for a bold, spicy food, and has the same kick). Inflected throughout with sinogrime’s favoured black-key flourishes, the record’s biggest achievement is its capturing of the push and pull between organic Eastern influences and the perception of those influences – the warm pan flutes of ‘Hainan Island’ unravel straight into the cocked guns and metallic crossfire of ‘Shenzhen’; the English-spoken warning of “I’ve got a dragon tattoo on my arm/ And I need to cause you harm” on ‘Dragon Tattoo’ sits side by side with distorted monologues of ancient Chinese poetry on ‘Loading Beijing’ and ‘Jade Stars’, and Al Qadiri’s pervasive otherworldly vocal manipulations lend the whole project a solid central voice to hold onto.

Where the album might falter is in the question of what that central voice is saying. Occasionally it feels reverent, for example in the rich choral tapestry of ‘Shanzai’, but then that reverence is brought into question by the very fact that the cultural phenomenon being examined is presented as a knock-off, a garbled interpretation. Sometimes the effect is terrifying, as with the prowl of ‘Dragon Tattoo’, but that dystopic nightmare sits alongside something as lush as ‘Hainan Island’. Al Qadiri’s voice exists all over this album, but unlike with her previous releases, where she related very honest, tangible personal experiences of listening and living that her audience were invited to empathise with, it refuses to act as narrator. Instead, Asiatisch is a mirror, glittering with the cracked conflicts of a thousand different stereotypes about Chinese culture, and as Al Qadiri stares into it, she raises more questions than answers, more observations than opinions.

Back when she was going by Ayshay, Al Qadiri told Dazed “ I never think about recording albums because I get bored really quickly. I think the EP is my favorite format. I approach music conceptually, I make a statement and then I move on to the next one.” It’s the sheer difference in scale between EP and LP that makes the listener expect a little more guidance or finality from Al Qadiri on Asiatisch, but arguably the leap from one format to another echoes a more mature development in the producer’s approach. Asiatisch explores a global web of folklore and imagery in a way that none of Al Qadiri’s releases have yet dared to do, and so it’s natural that it might feel open-ended, or require more listens to chew over. Where the album wins me over completely is in the nuance with which it grabs its subject matter, creating a listen that’s full of open space and calm-before-the-storm moments, allowing personality to play against imitation as Eastern instrumentation plays against a metallic grid of noise. It’s a fine tightrope between sounding like a gratingly repetitive Sinead O’Connor tribute act – or, worse, a fetishist of another culture – and pulling off a stunningly realised portrait of the dilution of that culture through globalised eyes. Al Qadiri doesn’t just walk the line, she strides.