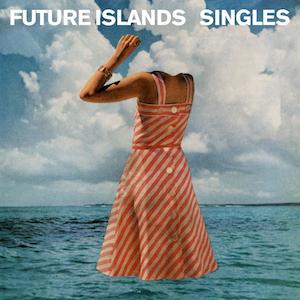 Future Islands have, for several years now, stood as a bastion of sincerity in a sea of winking pastiche – illogically so when you consider vocalist Samuel T. Herring’s vaudevillian persona and the band’s Moog-y retro-Americana stylings, which ordinarily would form a layer to hide behind. But as critic Neil Ashman has observed, Herring and co are somewhat of a paradox in their ability to wring oodles of pathos from the apparatus of artifice. Though affectation affords them a mask to hide behind, this band is holding nothing back.

The band’s sonics are perfectly in step with the simplicity of Herring’s sentiments (a series of pointedly slogan-like cliches), with the majority of the songs characterised by direct and easily consumed major key melodies, unfussy arrangements, and clearly-defined structures, driven by four-to-the-floor beats. ‘Back In The Tall Grass’ combines all these elements for the album’s highlight: a study in generating gravitas and import from pop’s essential components.

More sweeping and grand than any of their previous records, the trio’s fourth LP is by far their most cinematic, and if Singles‘ sound has a counterpart in Movieland it’s the films of Sofia Coppola. Coppola’s patronage of synth-pop acts like Air and Phoenix is important in itself, in that both acts (each of whose music featured heavily on the soundtracks of The Virgin Suicides and Lost In Translation, respectively) were instrumental at the turn of the century in restoring the ’80s to the pop conversation. And 10 years on from Lost In Translation, here we find Coppola influencing the music of some of millennial synth-pop’s finest purveyors.

Singles invokes the director’s later work, and in particular 2010’s Somewhere. Just as Herring’s stock and two-dimensional imagery works to revitalise the now meaningless iconography of America, throughout Somewhere Coppola locates the sublime in the common place and obvious. Both Future Islands and Somewhere, with their shared inclination for animating still, panoramic vistas, offer a vivid and sharp re-rendering of ordinariness; much like the photography of William Eggleston, they make the banal beautiful.

In less abstract terms, Future Islands’ power can just as easily attributed to their persistently strong pop songwriting, anchored by an unwavering ear for melody. ‘Spirit’ draws from Kraftwerk-influenced groups of the early ’80s, where the likes of ‘Doves’ and ‘A Dream Of You And Me’ borrow heavily from both yacht-rock and plastic, blue-eyed r’n’b. ‘Like The Moon’ is like a two-way split between Spandau Ballet and 10cc.

If the band’s recent viral performance on Letterman of ‘Seasons (Waiting On Change)’ sees the Youtube masses investigating the track’s parent album, their first exposure to the trio’s music will be what surely is Future Islands most gloriously pop record. But it’d be nice to think that the reason it was Future Islands and not their contemporaries who found universal appeal was on account of their decision to connect with the listeners as opposed to condescend them. If it so happens Future Islands current exposure leads to nothing, when perhaps the Youtubers delve deeper still they’ll discover the back catalogue of a band who alongside Phoenix, At The Drive In, Big Star and Neon Neon rank amongst the greatest pop acts in history to have never made the big time.