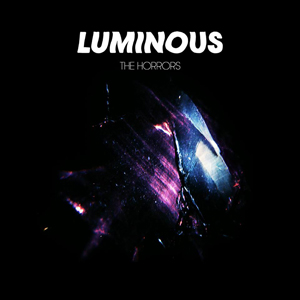 In advance of Luminous, The Horrors were to be found discussing their passion for dance music, for the transportive qualities of Juan Atkins and Underground Resistance. Sort of de rigeur for indie bands, really, many of whom spout this stuff in front of an tape recorder, but generally show little interest or capability of following it up in the studio. Luminous is a rock record, of course, and doesn’t have pretensions to being anything else. But in an age in which modern so-called psychedelic groups like Temples seem bound into this dreary, retrograde idea of psych effectively unchanged since the ‘60s, on Luminous The Horrors are drawing on electronic music, isolating its ecstatic repetitions and sense of narcotic escapism, and finding ways to integrate it into their design.

Personally, I didn’t get much out of The Horrors’ much-vaunted 2009 album Primary Colours, which was a big step on from the gothic garage of their debut, but felt patchy and in thrall to its influences. 2011’s Skying, though, was a nice surprise, The Horrors re-emerging as a dreamy post-punk group with notes of early Simple Minds or Psychedelic Furs, but transcending such points of comparison through a vaporous sense of uplift. Luminous doesn’t stray so far from Skying’s approach, instead concentrating on refinement and consolidation. Recorded over 18 months at The Horrors’ newly expanded Dalston studio, where guitarist and band “scientist” Joshua Hayward has assembled a mountain of custom-built machinery, modular pieces and hand-wired pedals, it finds the band refining both technology and technique. They’ve been encouraged along the way: a pyramid-shaped analogue synth imagined by Pete Fowler for the video to 2012 single ‘Changing The Rain’ was jumped upon by Richard Russell, boss of the band’s label, XL, who pulled out his chequebook and scribbled it into life.

In places, this remains Record Collection Rock. Opener ‘Chasing Shadows’ commences in intriguing fashion, rising gently from a warm sea of pattering conga and pretty modular undulations. As it kicks in, though, it’s basically baggy drums + bendy Kevin Shields guitar, with Faris Badwan doing Bobby Gillespie circa Screamadelica: “How do you feel when the sun hits your eyes? How do you feel when you see it for yourself?” It’s hard, though, not to be wooed by the fine detail – the string swells and strobing, sprite-like synths of ‘In And Out Of Sight’, or the Giorgio Moroder-ish ‘I See You’, which finds Hayward employing a Shepard Tone, an “auditory illusion” that gives the track a sense of infinite lift.

As important as the synth scientists, though, is Rhys Webb – a soul and funk obsessive and DJ at the group’s Cave Club, whose hopping bass lines give even Luminous‘s most gusty and atmospheric moments a twist in the hips. Badwan, meanwhile, appears to have taken singing lessons since Skying (or has at least invested in an autotune). The Horrors frontman is reluctant to analyse or unpick his lyrics, and generally they don’t connect in anything but the most superficial way. Still, he sounds just fine carried along on the swell, bringing gentility to the fey, glammy ‘Falling Star’, and adopting a pained croon on ‘Change Your Mind’, a sweet slow dance that recalls his work with girlfriend Rachel Zeffira in Cat’s Eyes. Possibly, some will leave Luminous disappointed that The Horrors haven’t pulled off another quantum leap, but by slowing down and bedding into their sound, they’ve made a record that feels both studied and instinctual, elevated and elemental, and that’s no mean feat.