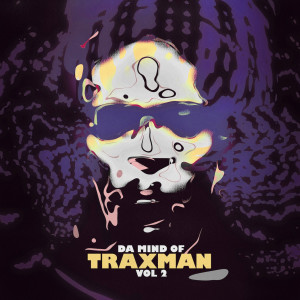 Footwork, says Cornelius Ferguson, is “house music at its best – it just got younger.” To an international audience, the high velocity sound of Chicago’s underground may seem to have emerged out of the blue a few years ago. Traxman is here to remind us that, far from it, his beloved style is drawing on and reinvigorating decades-old musical traditions.

It makes sense that Ferguson, moreso than many of his peers, should be mindful of heritage. After all he’s pretty much a dance music lifer, having been plugged into Chicago’s underground since ghetto house’s mid-’90s peak. His first internationally distributed album, 2012’s Da Mind Of Traxman, wore its influences proudly on-sleeve, whether the house music of decades past or canonical funk, soul and jazz. But while the album might have served as a history lesson, the playful and inventive way Ferguson handled his materials meant that it never felt stuffy or hectoring.

It’s clear throughout that Da Mind Of Traxman Vol. 2 is equally concerned with the past. ‘Let It Roll Geto’ whips up several sample sources – The Supremes’ ‘Come And Get These Memories’, the Eurythmics’ ‘Sweet Dreams’ – into a heady intertextual broth. ‘I Wanna Be High’ playfully recasts a snippet of ‘Easy Like Sunday Morning’ as a paean to weed, and there’s an obligatory Kraftwerk flip in ‘Computer Getto’, which jacks up ‘Computer World’ to hyper-kinetic effect. We’d be lost without an acid number, too, of course – ‘Under Cover Jack’ brings the goods.

Ferguson is one of footwork’s most versatile producers – a fact for which there’s plenty of supporting evidence here, from the weird gloopy textures of ‘Bubbles’ to ruthless battle track ‘Gone And Hit That Shit’ and the heavy metal-sampling ‘Tha Edge Of Panic’. But, as with Vol. 1 before it, footwork’s sensuous side – inherited from soul via disco and house – is the album’s bread and butter. The likes of ‘Mic’, ‘15416’ and ‘Make Love To Me’ offset their razor-sharp percussion with dusty woodwinds, rhodes and sinewy bass licks. Ferguson’s skill lies in working with these samples on a microscopic level, grinding them into an ever finer rhythmic powder until all that’s left are wisps of the stuff, dancing across the mix like dust motes in the sun.

Granted, sometimes you may want something firmer to hold on to, and these refractive tendencies can become a little tiresome over the album’s hour runtime. ‘Time Slip’’s title hints at the track’s endless state of rhythmic flux; this and a few similar productions might make you pine for a little stability. The issue isn’t helped by a lack of obvious standout tracks – the preceding volume and last year’s The Architek LP for Teklife both had more stunners (if you’re holding out for something as gorgeous as ‘Buddha Music’ or ‘Footworkin On Air’ then you’ll be disappointed). But even the album’s knottiest moments are difficult not to admire. Packed with bold ideas and striking new forms, Da Mind Of Traxman Volume 2  is as good a testament as any to the ongoing vitality of footwork. That it draws as much on the past as on the present to make its point is what makes it so inimitably Traxman.