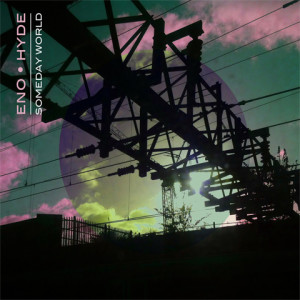 Brian Eno’s good reputation rests heavily on the idea he is a man of process: a creatively playful soul, just one split of an Oblique Strategies deck away from his next game-changing artistic breakthrough. A little scrutiny of his latter-day discography, however, doesn’t exactly bear this out. The last thing I can really remember enjoying from his recent creations is Bloom, the simple but immersive generative iOS app he made with Peter Chilvers back in 2008. That recent run of albums for Warp – like 2010’s Small Craft On A Milk Sea and 2012’s Lux – has felt slight and uninvolving, largely given an easy ride by critics either cowed before Eno’s good reputation, or worried that by calling out the Inventor Of Ambient Music for his lack of substance, they might somehow be putting their foot right in it.

This collaborative record with Karl Hyde, vocalist for Underworld, does not augur great things. Hyde’s 2013 solo debut Edgeland was a pretty limpid attempt at musical psychogeography, lacking in Underworld’s headier and more transcendent qualities, and hearing the pair discuss the making of Someday World doesn’t exactly suggest firmness of purpose. Eno speaks of “a big collection of ‘beginnings’ sitting around waiting for something to galvanise them into life”, while Hyde says making it was “a bit like being nine years old again… you have no idea what you’ve just been given, the record button has been pressed and you’re on.” Guests include Roxy Music’s Andy Mackay, Coldplay’s Will Champion and Eno’s daughter, Darla. The set-up feels rather cosy; the sense of ambition, low to non-existent.

The result is an album of experimental electronic pop that, sadly, doesn’t do much of any consequence, sounding both big-studio glossy and curiously cheap, busy but largely flailing around in the hope of finding an interesting direction. Opening track ‘Satellites’ is twinkly drum machine motorik with horns tinnier than an Andy Warhol exhibition. ‘Daddy’s Car’ holds onto the brass, and inexplicably adds a funky drummer beat and some one-fingered keyboard jamming. ‘Man Wakes Up’ is a slightly sterile, factory-fresh take on Afro-pop that finds Hyde in free-association flow, although we can hopefully agree he’s hardly hitting the Ballard-on-E heights of Dubnobasswithmyheadman: “He turns into words / The words into architecture / Buildings that grin at him like giant clowns…” And so on.

Probably the key track here is ‘Witness’, which sounds like art-pop Eno, albeit with a Coldplayish safeness of step. Synth lines descend in vaguely ‘Yellow’ fashion, there’s a witless Kraftwerk steal (“Pylons… sun… moon… drums” chants a female voice, robotically), and a tone of benign catharsis prevails. Not much here improves on it, although there is something close to a neat run about halfway through. ‘Mother Of A Dog’ is a moody thing that could have slotted in to the second side of Underworld’s Beacoup Fish, while ‘Who Rings The Bell’ isn’t bad either, Hyde adopting an almost monastic delivery over chattering electronics. The following ‘When I Built This World’ suggests it’s just a blip, though, lurching from drab voice manipulations to a rather horrible passage of prog-rock jamming.

Neither Eno nor Hyde are washed up, I don’t think, and both surely have things to contribute to music in 2014. But the depressing thing about Someday World isn’t just that it’s a bad album, but what it says about the vacuity of Eno’s current approach. Its essential spirit is one of open-mindedness, throwing the doors open to serendipity and happy accidents: as David Lynch might put it, catching the big fish. But listening to these two veterans casting out their lines and pulling back a procession of shopping trolleys, rusty bicycle frames and discarded wellington boots, you might venture that a touch more focus and rigour, some firm concepts or guiding principles might help things along. No big fish are landed here, but I’m reminded of another sporting phrase: all the gear, no idea.