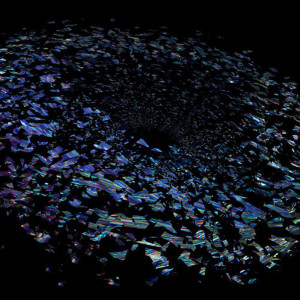 Much ink has been spilt in the last 18 months or so about a renaissance in the field of grime production, focusing a new generation of beatmakers formally indebted to the genre pioneers, but seeking to push things forward. Movements can be hugely positive things, particularly in a club scenario, where the sense of a shared purpose can be galvanising for fans and practitioners alike. But it’s always interesting to look at those who shun easy bracketing, and step to no beat but their own.

Take Louis Carnell, aka Visionist. Born in Herne Hill, relocated to Nottingham in his teenage years, and now back resident in south London, Carnell is something of a grime scholar, and in interview, sceptical about the idea of “nu-grime” – which seldom offers anything particularly innovative, he argues, especially placed next to the bold moves of grime’s pioneers. Still, for the sounds he rates, he’s willing to put his money where his mouth is, his Lost Codes imprint home to impressive debuts by the likes of SD Laika, Saga and Dark0.

Carnell’s music under the Visionist name is dark, haunting, dramatic, minimal. It would be reductive to call him an ambient grime producer – indeed, there’s a rowdiness to tracks such as ‘Snakes’, a liquid, menacing pulse of slithering synths and percussive gunshots that FACT memorably appraised by graph on its release last year. But I’m Fine II, though, makes even that pared-down tune sound borderline cluttered. A second instalment of six tracks released, like its predecessor, on the New York label Lit City Trax, it’s a conceptual piece of sorts, relating to Carnell’s experience of bereavement, and specifically the five stages of grief: denial, anger, bargaining, depression and acceptance. It is also Carnell’s most impressive release so far: a translucent, deeply affective collection characterised by its haunted longing, pared-down rhythms and sustained sense of melancholy.

Simplicity is Carnell’s watchword. His tunes are brief, often falling shy of three minutes, and largely work in the higher registers, crafted from just a few elements: the blippy bass and saw-like percussion laced throughout The Way; or the disembodied diva cries which reach out through the inky blackness of Eye Try, finally coalescing into a repeated “Sometimes it’s all gone…” The heavy emotional content of Carnell’s music sometimes brings to mind Zomby – although Visionist, by contrast, works with a sensei-like focus. Burial might be another point of comparison, specifically in reference to the way Carnell uses the human voice: brief snippets of pop and R&B tunes cut up like taxidermy, and then coated in reverb so they gleam and shimmer, like ice sculptures. But by paring down and then paring down again, Visionist finds a style of his own.

When I interviewed Carnell earlier this year, he questioned whether the first instalment of I’m Fine really qualified as grime: sure, the 140bpm ‘Escape’ fits the bill, but how about the shimmering footwork skitter of the title track, or the spooked, drumless Fatima Al Qadiri collaboration ‘The Call’? And so it is with this instalment. ‘First Love’, with its fluttery vocal samples and claps that land like flyweight jabs, is the one track here that really approaches grime orthodoxy. Others hint at it, but find their way to somewhere more ineffable: the cryptic, contemplative ‘More Pain’; or ‘Acceptance’, near beatless but driven along on a bass throb with twin vocals that twine around and echo one another, as if united in some shared grief.

It’s probably a mark of I’m Fine II’s greatness that, for all its sparsity, it’s hard to imagine how the Visionist project can build on it. You certainly can’t imagine MCs on these tracks – too fragile, too floaty – but nor can you imagine vocalists doing much for him: who could articulate these rending, desperate emotions better than Carnell does here? Intriguingly, Carnell has been listening to Oneohtrix Point Never and Boards Of Canada, and says he has an LP for PAN in the works. So if right now, his work functions right at grime’s outer limits, the next might see him slip that niche altogether. It should be worth waiting for.