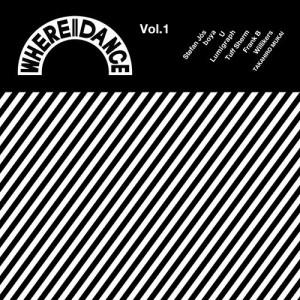 Where To Now? It’s a bold name for a label; the sort of proudly modernist formulation you’d expect to see on the cover of some pioneering free jazz LP. Going on that evidence alone, we might presume that Matt Hendon and James Hines are concerned with the deadly serious business of uncovering The New. Certainly, the pair – based in Brighton and London respectively – claim to operate “on the edge of genre”. But theirs is a quiet sort of innovation. As releases from poundshop collagist Wanda Group and London’s Helm have shown, they’re drawn to figures who don’t seek to break apart genre so much as quietly retreat from it; aesthetic wallflowers whose statements are liable to pass you by if not given close attention.

Of course, electronic music is a very hospitable place for such interstitial figures right now, and in Where To Now?’s explorations of techno, industrial and scuzzed ambience you may detect shades of more established cassette labels like Opal Tapes. So it should come as no surprise that, as with many of their forebears, Hines and Hendon have now chosen to make a more prolonged foray onto the dancefloor. This compilation inaugurates “label within a label” WHEREIIDANCE, which sets its sights on dance (specifically house and techno) convention. It’s the most direct music Hines and Hendon have yet released – though it retains a hint of WTN?’s shadowy aesthetic.

As usual, the pair are drawn to fringe figures – mostly new and lesser-known artists with a quietly distinctive vision. The breadth of talent is striking – four continents are covered across eight tracks (with, incidentally, a particularly strong Irish contingent). More surprising still, given WTN?’s bread and butter, is how conventional they’re willing to go. The opener, Stefan Jós’ ‘People On The Bridge’, is a relatively conventional piece of dubtechno, though its familiarity doesn’t make its dappled chords and gently tape-crunched percussion any less lovely. Later on, Australia’s Dro Carey – probably the most established presence here – girds his sampladelic techno style with what could almost be described as a big-room dynamic.

In fact, the compilation’s odder moments prove, in some cases, to be the least successful. Boya and U both opt for mirage-like, pumping slow-mo techno; both tracks, while sonically interesting, feel like wading through wet cotton wool, and their stodgy groovelessness makes for an exhausting listen. Fortunately Lumigraph is on hand with the >140bpm bump of ‘Ski Mask (Dub Not Dub)’. It’s a typically vivacious cut, and possibly the most energetic  moment here (tied with the menacing UFO techno of Frank B’s ‘Phosphenes’, which makes up in trippy pungency what it lacks in velocity).

Mostly, Hines and Hendon steer clear of full-bore intensity in favour of subtle surprises. Willikers – the duo of Public Information’s Austin Cesear and Cody De La Vara – serve up an excellent slice of loop-techno in ‘AHF’. At the opening it’s marvelously light, but the mix becomes ever more grot-caked as the minutes slip by, as if a soundsystem is being pushed further and further into the red. It’s probably the best track here, even if Cesear, like many of these producers, has reached greater heights elsewhere. Though it’s not quite remarkable, WHEREIIDANCE should be commended for shaping a unified aesthetic from such diverse materials. It supplies plenty of pointers for further exploration, too; you’ll soon find yourself browsing discogs thinking, eagerly, “where to now?”