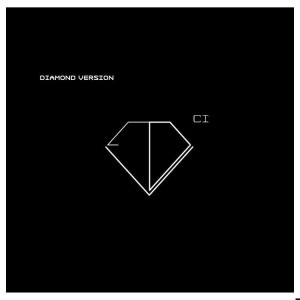 Olaf Bender and Carsten Nicolai have long been established as important players in dance music, both as artists – they are Byetone and Alva Noto respectively – and as lynchpins of the pivotal Raster-Noton label. But given that their collaborative project Diamond Version owes as much to industrial and bleak synthpop as it does techno, it’s a better fit for Mute than Raster-Noton. Their debut album CI follows five EPs for Mute, its title standing for Corporate Identity. In theory, “Corporate Identity” is Diamond Version’s dystopian vision of a world wracked by technological corporatism; in reality, it’s about as ham-fisted an album framework as you’re likely to come across.

The title is the first of several red flags. “We tried… unpredictable vocalist collaborations – something that you would not think of in the first place, so it didn’t feel streamlined,” say Diamond Version in the text accompanying the release. They succeed on that count, at least; Neil Tennant of the Pet Shop Boys might be the last person you’d expect to show up on a Diamond Version album. Unfortunately, the sheer awfulness of the incongruous gospel cover and lead single ‘Were You There’ overshadows this sense of surprise. Even as an instrumental, ‘Were You There’ would be one of Diamond Version’s less finessed tracks, its corny synth chords and drum breaks far from the brute menace they’re better known for; with Tennant’s vocal, it’s difficult to overstate just how embarrassing it is.

Several of the tracks on CI have already appeared in one form or another on the group’s EPs, so the concept isn’t too much of a surprise as we’ve come across the track titles before. But on CI, not only are new, more song-oriented pieces generally weaker, the whole thing feels inane rather than satirical. “Do you suffer from pain?” asks a pitched-down vocal on ‘Science For A Better Life’, its excruciating obviousness only matched by the voiceover on opener ‘The Blank Action’, an electro-industrial banger horribly redolent of Justice.

All of which is a shame, because when you cast aside the clumsy concept, poorly executed songs and eye-wateringly terrible lead single, CI contains some excellent moments. ‘Turn On Tomorrow’ lashes together punishing kicks, washes of white noise, fizzling snares and towering synth chords, and the effect is genuinely ominous, showing that it’s possible – preferable, even – to conjure sombre dystopia without resorting to cliché. It’s a slimmed-down rendition of the version that appeared on EP3 and hits twice as hard, while ‘Make.Believe’, also a shortened EP track, is all blistering breakbeats, mournful melody and perilous buzzing. ‘Operate at Your Optimum’ is as fun as it is ferocious, an initially spartan track that blooms into an electro heater cut through with fierce slashes of white-hot noise.

Nobody can deny that Carsten and Bender are terrific producers, and that for every ‘Were You There’ on CI there’s a ‘Make.Believe’ to compensate. But while the edits of the EP tracks are welcome, to package them up with such stodge seems a waste. Severity has long been a main draw of Diamond Version’s music but more often than not, the attempts to leaven it here simply don’t work. To appropriate its melodramatic language, all too often CI feels like an experiment gone horribly wrong.