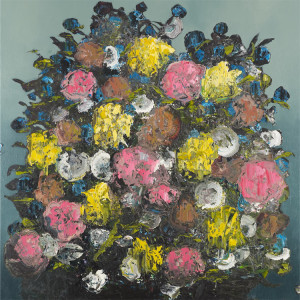 “The idea for The Death Of Rave was conceived in early 2006 after a visit to the Berghain Club in Berlin,” James Leyland Kirby explains in the press material for this reissue. “At the time Berghain was about to explode on the international club scene as a temple. The feeling was in the air that something special was happening. I went and saw a pale shadow of the past. Grim and boring beats, endlessly pounding to an audience who felt they were part of an experience but who lacked cohesion and energy. For me personally something had died. Be it a spirit, be it an ideal, be it an adventure in sound. Rave and techno felt dead to me.”

Dance music culture has experienced a rash of rave remembrance in recent years. Whether the club-ready genre reboots of Paul Woolford’s Special Request and the Modern Love-affiliated HATE project, or more unusual hybrids from Four Tet and Tessela; whether repurposing video footage from the era or, as with Lee Gamble’s Diversions 1994-1996, reforming its sonic material into abstract collages, many artists have been feverishly picking over British club music’s most storied era.

With this renewed interest in early ’90s hardcore rave and its successor, jungle, has come a growing admiration for The Death Of Rave. Across the original project’s 200 tracks, Kirby transforms rave classics into ghostly particulate clouds; obscure, largely pulse-less echoes of their former glory. In some cases Kirby is the direct inspiration for what’s followed; in others he simply pre-empted the interests of these newer artists by several years. Either way, the importance of the project can’t be denied, a fact of which this partial reissue (eight tracks have been cherry-picked from the original batch) is a timely acknowledgement.

It does, however, come with a fair bit of ideological baggage. Kirby’s music, preoccupied with issues of cultural memory, loss and decay, has long been entwined with a certain discourse concerning the decline of innovation in Western popular music. In a 2009 Wire feature, Mark Fisher, one of the foremost commentators on the “Hauntological” movement of which Kirby was considered a part, described the producer’s output as tackling “the failure of the future” (later that year Kirby released a triple-CD album titled Sadly, The Future Is No Longer What It Was). In 2011, Simon Reynolds gave Kirby’s music a hefty footnote in his book-length indictment of retro-culture, Retromania.

Speaking about The Death of Rave, Kirby, who was a dedicated raver growing up in Stockport in the late ’80s and early ’90s, has lamented “a total loss of energy in most electronic musics across the board.” He describes the project as taking his source material “from the rave to the grave” – entombing it, in other words. Presumably he feels the need to do this because the rest of dance music culture won’t. Perhaps it hasn’t yet realised that it’s beholden to a walking corpse.

As for his critical allies: in the late 2000s both Fisher and Reynolds became embroiled in a debate about the death of innovation in dance music – specifically the UK’s so-called “Hardcore Continuum”, for which early ’90s rave was the touchpaper. As is usually the way with these things, the debate slowly petered out but was never really resolved, and many of the arguments made then against the validity of contemporary dance music still persist (Berlin’s CTM festival last year hosted a talk titled The Death of Rave, featuring Fisher on the panel, which launched off from Kirby’s assertion that “the corpse of rave bears no resemblance to those heady days in the late ’80s and early ’90s”).

All of this has been discussed extensively, and if you know which blogs to poke around on (try these) then hours of anorak fun await. But The Death Of Rave (A Partial Flashback) – the first time any part of the project has seen physical release – feels like it’s raking over the coals. House and techno remain a dominant force at all tiers of dance music, from the charts to the most esoteric boutique labels, and this project’s founding myth – Kirby’s visit to the Berghain – appears to be a direct critique of these styles. Not only their “grim and boring beats”, but their audience, who feel they are “part of an experience” but, it is implied, are tragic latecomers, doomed to cultural mediocrity for the misfortune of having been born two decades late.

Kirby is quick to dismiss his successors too, and their obsession with “re-creating remembered rave textures and memories”. His project, he says, “was not nostalgia, it was an inverted paean to a time when the music was about bringing people together for a shared experience.” It’s difficult to entirely believe him. Each of these tracks is named for one of Kirby’s “strongest rave-memories”, and the best ones do seem to indulge in that gentle tug-of-war between sweetness and sadness which seduces us all from time to time. ‘Monroes Stockport’, ‘Moggy & Wearden’ and ‘Smithy & Dave The Rave’ are each half-beautiful, their woozy chord samples smothered with a dull static roar. It’s as if we’re scudding through a thousand rave moments at hyperspeed, each one passing in a blaze of sound and glory, but the overall effect is one of melancholy repose.

But otherwise, sure, Kirby is right to claim that there’s a fundamental distinction between his music and that of subsequent rave revivalists. Where, for example, Woolford’s “false jungle memories” revel in the style’s energy and exuberance, Kirby’s productions tend to be drained of all vitality. And where Gamble has professed to being less interested in his samples’ properties of recall so much as their “richness” as a source material – their pure formal potential, in other words – Kirby’s music is not about exploring such formal possibilities. Instead it’s about turning rave inwards, collapsing it, narrowing its colour palette to a handful of sombre shades.

Unsurprisingly, then, the album grows ever darker as it wears on. ‘Machete’s At The Banshee’ howls forlornly through some abandoned warehouse space. ‘Acid Alan, Haggis & Scott’ and ‘Marple Libradrome ’91’, thick with subbass rumble, possess a feeling of distant unease which never quite surfaces. And the billowing dread of closer ‘XR2 mk1 Sale Waterpark’ seems to occur at one remove. Musically, these tracks are elusive, their fogged, indistinct textures offering little to grasp onto. Conceptually – speaking as someone for whom the answer to the question “Where were you in ’92?” is “in nappies” – the tone can feel strangely hectoring. Not shouty, but disapproving through the things it withholds, as all of the most effective telling-offs are.

I’m reminded of the arguments of those critics – Reynolds, Fisher et al – which, however informed they may be by a vast knowledge of their field, are also grounded in the personal experience which comes with being of a particular age and background. Their 40-something peers might be able to nod sagely along, but younger music fans are left with an awkward choice. Either agree, and submit that all of your cultural endeavours will exist in the shadow of an era with which you had no direct contact; or bullishly disagree, in spite of strong evidence that, well, they’re not entirely wrong. In either case you reach an impasse: what can any of us do about it? As valid as such observations about cultural heat death might be, the causes of such a problem are surely structural, encapsulating global politics and economics, seismic cultural and technological shifts. They certainly go far deeper than any one person’s (or even one scene’s) failure of imagination or ambition.

As such, I find myself sympathising less with Kirby’s project, which is defined exclusively in negatives – negative space, destructive processing techniques, an adversarial stance towards the culture that sustains it – and more with the producers that have followed him. At least they are finding thrills in this music, however familiar they may be. And at least, in the case of someone like Lee Gamble, they are seeking out new forms and ideas, however incremental that exploration may seem. As for the discomfort towards nostalgia: it’s an emotion with many subtle tones and inflections, and its usefulness is entirely down to the way it’s deployed – a fact of which Kirby, through his work as The Caretaker, is well aware. The Death of Rave’s murky anhedonia is much harder to appreciate. At its most extreme – the industrial gloaming of ‘Big Eddie’s Van – Bowler’s Car Park’, say – he doesn’t even seem to be mourning the death of an idea so much as grimly interring it, one spadeful of blackened earth at a time. And nobody enjoys a funeral, do they?