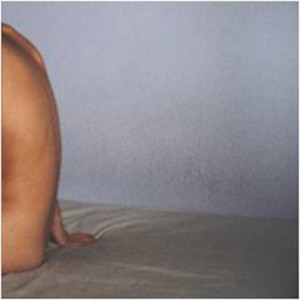 As the former frontman of Altar of Plagues, a band that were credited with finding room to roam and experiment within what was at that point a genre pretty set in its ways – they’ve often been referred to as “post-metal” and “ambient metal” – Irish musician James Kelly has always been interested in positioning himself between delineated spaces.

Kelly’s first solo outing as WIFE came with 2012’s Stoic EP for Throwing Snow and friends’ Left_Blank imprint, just a few months before Altar of Plagues announced their disbandment – though Kelly stated that he had been planning to conclude the band for a while, with 2012’s Teethed Glory and Injury designed as the group’s final album. All of this is relevant to What’s Between, his first album as WIFE, because it sheds light on an artist who constantly plays with conflict and limitation. A metal frontman who screams “everything is destroyed”, embodying the genre and yet stretching it with jazzy, improvisational breakdowns; an electronic producer who wryly calls his music “stoic” and yet stuffs it with bare-faced emotion as hungrily as he stuffs his fingers into a peach in the video for ‘Bodies’.

What’s Between sits at an intersection between the looming drone of the Haxan Cloak (who contributes production), the moody ambience of Forest Swords or oOoOO and the sincere lyricism of How To Dress Well or Future Islands, with vocals ranging from pop-punk (see upbeat ditty ‘Fruit Tree’) to a sultry croon (see ‘Tongue’). While all of those elements float in and out, though, Kelly imposes limitations on himself that makes the record feel sparse and full of reflective space – leapfrogging from musical touchstone to touchstone, embracing the conflicts created without letting them become overwhelming and tying all nine tracks together with a surprising knack for pop storytelling.

The album’s high point comes with a song written about a personal loss Kelly suffered during the making of the album, a head-and heart-engulfing dance track called ‘Living Joy’. It’s just like WIFE to extract elation from a mournful central hook like “she’s gone”, and he pulls the same manoeuvre on ‘Heart’, bemoaning the breakdown of a relationship over a downtempo instrumental made of little more than an insistent kick drum and vocal manipulations.

At its core, What’s Between is an album that speaks both to the body and about the body with surgical precision. Picking out elements of dance, pop and noise that sink under the skin, its crescendos – the crashing chorus of ‘Salvage’ and the rising crest of ‘Living Joy’ – provide physical rushes. Lyrically it focuses on aspects of the body and the self that form boundaries with others, dissecting what it means to lie on ‘Tongue’, and reminiscing about shared spaces on ‘Heart’.

While its completeness verges on being just a bit too clean – its theme too constant and perfectly articulated for the record to feel quite as messy as the subject matter might make a listener long for – What’s Between is still a resounding success. It succeeds as an exploration of bodies, but more specifically, of the kinds of tension created by the dichotomies between them and within them, throughout an intimately crafted pop record that treads that careful line between wallowing and pleasure in the way that all the very best pop records do.