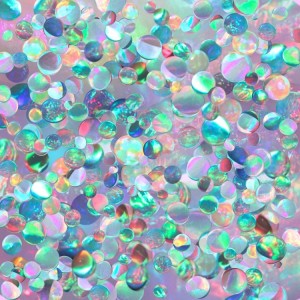 Available on: No Pain In Pop EP

Nabihah Iqbal, it seems, sees things a little differently to the rest of us. She has said that the ideal environment for listening to her new EP would be a murky set from Ridley Scott’s Blade Runner. Evidently she detects a heat, colour and opulence in that film which most of us missed. Then again, so wonderfully bright and steamy is the EP’s lead track ‘Sweet Tooth’, you can imagine it warming up even the shadowy interior of Dr. Tyrell’s corporate mega-pyramid. “Sugar face / honey lips / candy eyes / sweet surprise,” recites vocalist Emily Bee over a New Age bubblebath of synths. As paeans to desire go, it might be saccharine but it’s more or less irresistible.

19 Jewels isn’t Iqbal’s first release as Throwing Shade, but it’s certainly her most developed. Earlier work from the producer — last year’s Mystic Places twelve for Kassem Mosse’s Ominira label; reworkings of the likes of Mariah Carey; party-ready mixes — tended to live up to the “cosmic R&B” tag she has adopted. Affiliations with SOPHIE and Felicita, meanwhile (the trio co-ran the Sheikha night together) suggested a slightly arch art-school angle on pop’s bubblegum excess.

This EP is a bit different. Drawing not on samples but her own vocalists (Bee on ‘Sweet Tooth’, Iqbal herself and a male friend elsewhere) and exploring a broader emotional palette, 19 Jewels exists much more fully in its own universe. A very captivating universe it is too – a landscape of rich pastel tones, humid even when it’s rather sinister (as in ‘Pure Life’, whose hollow bell sounds are thickly misted with reverb, so that picking out melodies is like trying to breathe deeply in a steam bath).

A former ethnomusicology student with a globetrotting show on Dalston’s NTS Radio (she has said that she likes each track to hail from a different country in any given show), it’s tempting to detect a global slant to Iqbal’s music. And sure, if you squint, certain pentatonic scales and other modes might bring to mind Middle or Far Eastern music. But much more important are the twin poles of the US and Iqbal’s native London. ‘Once’’s angular drums and minor tonality have something of the cadence of grime to them – albeit grime that’s been stupefied by the heat. ‘Real Bad’, meanwhile, sports a kind of anaesthetised Timbaland shuffle.

In fact, the latter track’s pitchshifted vocals and clunky white-note synth figures riff on R&B in a manner similar to another denizen of London’s bedroom-pop underground, Hype Williams. But where Dean and Inga process(ed) their influences into claggy, weedsmoke-filled opuses, Throwing Shade’s music is unfailingly slick and smooth. As a result, you might not catch its complexities the first time around, but it’s worth persevering. Listen again to that lead track – and if you’re anything like me then you will, many times – and you might catch its subtle closing twist. ‘He’s so sweet, rots my teeth,’ says Bee, and suddenly desire takes on a darker hue.